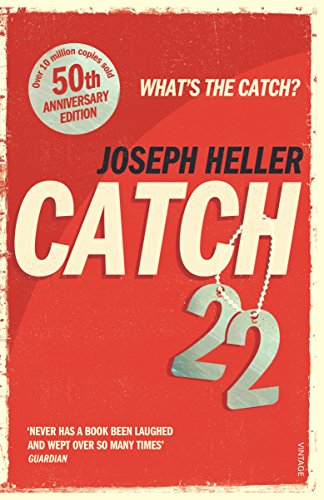 About the Author:
Joseph Heller was born in Brooklyn, New York, in 1923. In 1961, he published Catch-22, which became a bestseller and, in 1970, a film. He went on to write such novels as Something Happened, God Knows, Picture This, Closing Time (the sequel to Catch-22), and Portrait of an Artist, as an Old Man. Heller died in December 1999.

Book Description Paperback. Condition: New. Language: English. Brand new Book. Explosive, subversive, wild and funny, 50 years on the novel's strength is undiminished. Reading Joseph Heller's classic satire is nothing less than a rite of passage.Set in the closing months of World War II, this is the story of a bombardier named Yossarian who is frantic and furious because thousands of people he has never met are trying to kill him. His real problem is not the enemy - it is his own army which keeps increasing the number of missions the men must fly to complete their service. If Yossarian makes any attempts to excuse himself from the perilous missions then he is caught in Catch-22: if he flies he is crazy, and doesn't have to; but if he doesn't want to he must be sane and has to. That's some catch. Seller Inventory # AAZ9780099529125