Items related to A Sea Of Troubles

Leon, Donna A Sea Of Troubles

A Sea Of Troubles 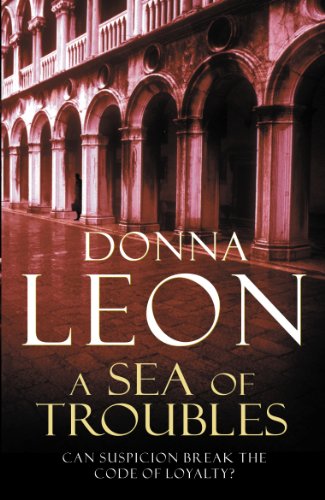 Donna Leon has lived in Venice for thirty years and previously lived in Switzerland, Saudi Arabia, Iran, and China, where she worked as a teacher. Her novels featuring Commissario Brunetti have all been highly acclaimed, including Friends in High Places, which won the CWA Silver Dagger for Fiction.

David Colacci is an actor and director who has directed and performed in prominent theaters nationwide. His credits include roles from Shakespeare to Albee, as well as extensive work on new plays. As a narrator, he has recorded more than one hundred audiobooks, earned eight AudioFile Earphones Awards, and been a finalist for the prestigious Audie Award. His narration of The Suspect was named one of AudioFile's Best Audiobooks of 2007.

Praise for A Sea of Troubles:
“Brunetti . . . is the most humane sleuth since Georges Simenon’s Inspector Maigret . . . He is a decent man [who achieves] a quiet heroism.”―Philadelphia Inquirer
“Donna Leon goes from strength to strength . . . This is her tenth novel but it’s as fresh and entertaining as the first.”―Observer (UK)
“Brunetti is hard to beat―Leon’s tenth novel more than maintains the standard of its predecessors.”―Times Literary Supplement (UK)
“[Brunetti] is a tenacious underdog and his journey through Italian venality and administrative woes is always rewarding.”―Guardian (UK)
“The arrival of a new Donna Leon book fills me with pleasurable anticipation. She tells a good story, including the best of all current police detectives, Commissario Brunetti, and locates it in a superbly described Venice. The plot is beautifully constructed. The climax is exciting and disturbing . . . Brunetti is as irresistible as ever.”―Scotsman
“Mesmerising.”―Express on Sunday (UK)
“A splendid series . . . with a backdrop so vivid you can smell it.”―Sunday Telegraph (UK)
“The best yet in this series.”―Amore Travel Guides

1. A Sea of Troubles

6. A Sea of Troubles

Book Description Arrow Books Random House UK Mrz 2002, 2002. Taschenbuch. Condition: Neu. Neuware - The murder of two clam fishermen off the island of Pellestrina, south of the Lido on the Venetian lagoon, draws Commissario Brunetti into the close-knit community of the island, bound together by a code of loyalty and a suspicion of outsiders worthy of the Mafia. When the boss' secretary Signorina Elettra volunteers to visit the island, where she has relatives, Brunetti finds himself torn between his duty to solve the murders, concerns for Elettra's safety, and his not entirely straightforward feelings for her . 336 pp. Englisch. Seller Inventory # 9780099536574