Items related to I Even Funnier 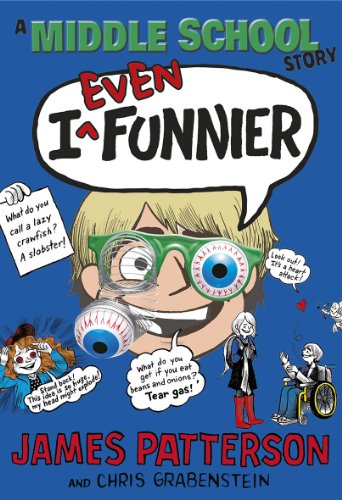 In this follow up to the #1 New York Times bestseller I Funny, middle schooler Jamie Grimm has big dreams of being the best stand-up comic in the world--and he won't let the fact that he's wheelchair-bound stand in his way. After winning the New York state finals in the Planet's Funniest Kid Comic Contest, Jamie's off to Boston to compete in the national semi-finals. But when one of his best buddies runs into trouble at school and a sudden family health scare rears its head, Jamie has to put his comedic ambitions on hold and stand by the people he cares about. Can Jamie pass up the big competition for the sake of his friends and family? (Includes more than 175 black-and-white illustrations.)

Gr 3–7—Wheelchair-bound Jamie Grimm is working on new material for his upcoming entry in the regional finals of the Planet's Funniest Kid Comic Contest. Patterson and Grabenstein pay homage to the timeless comedy of Abbott and Costello, Groucho Marx, and other greats, while introducing new jokes that speak directly to the middle school experience. Though it will date the series more quickly, references to trendy Vegas casinos and comedians such as Ray Romano, Ellen DeGeneres, Steven Wright, and Chris Rock give the book an air of hip relevancy. Can Jamie find humor in his bullying cousin, Uncle Frankie's medical emergency, and confusing relationships with Gilda Gold and "Cool Girl?" Yes, he can. And if you're wondering if a heavily illustrated comedic novel can make it as an audiobook, that's a yes, too. Young Frankie Seratch is perfectly cast as the narrator of this heartfelt and very funny look at middle school and family relationships. Seratch ensures that the humor comes across as intended, without a hint of mockery or maliciousness. A PDF companion file of the book's illustrations is included on disc three.—Lisa Taylor, Ocean County Library, NJ

Book Description Arrow (Young), 2013. Paperback. Condition: Used; Good. **Simply Brit** Shipped with Premium postal service within 24 hours from the UK with impressive delivery time. We have dispatched from our book depository; items of good condition to over ten million satisfied customers worldwide. We are committed to providing you with reliable and efficient service at all times. Seller Inventory # 3004337

Book Description -. Paperback. Condition: Very Good. I Even Funnier: A Middle School Story: (I Funny 2) This book is in very good condition and will be shipped within 24 hours of ordering. The cover may have some limited signs of wear but the pages are clean, intact and the spine remains undamaged. This book has clearly been well maintained and looked after thus far. Money back guarantee if you are not satisfied. See all our books here, order more than 1 book and get discounted shipping. Seller Inventory # 7719-9780099567455

Book Description Arrow (Young) 05/12/2013, 2013. Paperback. Condition: Very Good. Shipped within 24 hours from our UK warehouse. Clean, undamaged book with no damage to pages and minimal wear to the cover. Spine still tight, in very good condition. Remember if you are not happy, you are covered by our 100% money back guarantee. Seller Inventory # 6545-9780099567455

Book Description Paperback. Condition: Very Good. The book has been read, but is in excellent condition. Pages are intact and not marred by notes or highlighting. The spine remains undamaged. Seller Inventory # GOR007517760

Book Description Paperback. Condition: Good. The book has been read but remains in clean condition. All pages are intact and the cover is intact. Some minor wear to the spine. Seller Inventory # GOR007180272