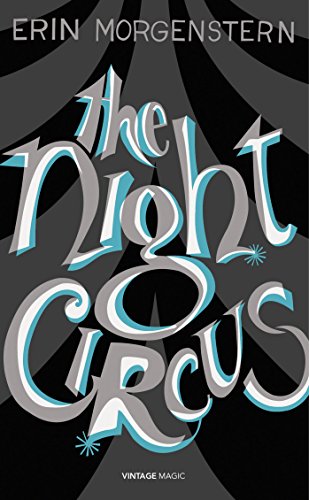 But behind the scenes, a fierce competition is underway—a duel between two young magicians, Celia and Marco, who have been trained since childhood expressly for this purpose by their mercurial instructors. Unbeknownst to them, this is a game in which only one can be left standing, and the circus is but the stage for a remarkable battle of imagination and will. Despite themselves, however, Celia and Marco tumble headfirst into love—a deep, magical love that makes the lights flicker and the room grow warm whenever they so much as brush hands.

True love or not, the game must play out, and the fates of everyone involved, from the cast of extraordinary circus per­formers to the patrons, hang in the balance, suspended as precariously as the daring acrobats overhead.

Written in rich, seductive prose, this spell-casting novel is a feast for the senses and the heart.

Amazon Best Books of the Month, September 2011: Erin Morgenstern’s dark, enchanting debut takes us to the black and white tents of Le Cirque des Reves, a circus that arrives without warning, simply appearing when yesterday it was not there. Young Celia and Marco have been cast into a rivalry at The Night Circus, one arranged long ago by powers they do not fully understand. Over time, their lives become more intricately enmeshed in a dance of love, joy, deceit, heartbreak, and magic. Author Morgenstern knows her world inside and out, and she guides the reader with a confident hand. The setting and tone are never less than mesmerizing. The characters are well-realized and memorable. But it is the Night Circus itself that might be the most memorable of all. --Chris Schluep

ERIN MORGENSTERN is a writer and multimedia artist who describes all her work as being “fairy tales in one way or another.” She lives in Massachusetts.
From the Hardcover edition.

Shipping: US$ 30.93
From United Kingdom to U.S.A.
Destination, rates & speeds