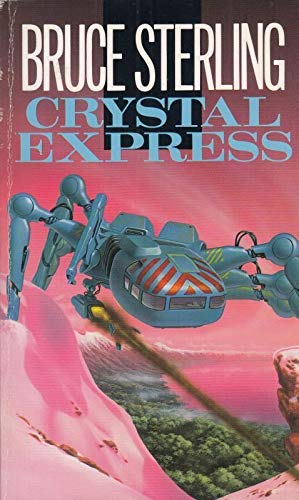 This collection gathers twelve tales by one of the leading new voices in science fiction. The stories are divided into three groups: Five fall into Sterling's "Shaper/Mechanist" coterie of tales; three are science fiction of a more generic type; and four tales are labeled as fantasy. The Shaper/Mechanist stories center on a future world in which two opposing sects have developed: the "Shapers" have evolved themselves through genetic tinkering; the "Mechanists" through computerized prosthetics. Sterling explores the consequences of both approaches, painting neither side as necessarily good nor evil, and stories are related Erom both points of view. Among the other tales, "20 Evocations" effectively links anecdotal episodes of Nikolai Leng's life to create a coherent picture of Leng's gradual transformation from young innocent to cornipt elder. In "Spook," the earth has suffered a "brain drain" through mass emigrations to space leaving a world populated mainly with "undesirables." The powers-diat-be have their hands full trying to maintain a semblance of order and control; faced with a potential uprising in Central America, they contract the services of a futuristic secret agent-the "spook" of the title-to quell the insurgency. The denouement to this space-age thriller is devasting. "Green Days in Brunei" is set in the tiny nation of Brunei on the island of Borneo to which Canadian engineer Turner Choi has been dispatched to help introduce a bit of twenty-first-century technology to a society that has previously rejected high tech to the point of outlawing telephones. Choi eventually becomes romantically involved with the royal princess of Brunei in this, what may well be Sterling's best story. The fantasy-oriented tales which close out the collection largely feature a tongue-in-cheek tone and are, unfortunately, not as interesting as the preceding works. -- From Independent Publisher

Sterling ( Islands in the Net ) is one of the very best young science fiction writers, and one of the foremost exponents of cyberpunk (he edited Mirrorshades: The Cyberpunk Anthology ). His first collection brings together a dozen of his evocative, inventive, beautifully written stories. "Spook" tells of a future intelligence agent who is subjected to an operation that removes the psychologically limiting Veil implanted in his head, and then finds freedom untenable because it brings realization of all the suffering he has caused. "The Little Magic Shop" is a whimsical story about life-extending elixir, with a twist. Five of the stories are from the Shaper/Mechanist series, set in a future in which the two races war for the universe's resources. "Swarm" tells of a Shaper who craftily gathers some genetic material from the alien Swarm race with the intent of creating a slave population, but whose plans backfire spectacularly when his understanding of the Swarm proves less advanced than his technology.
Copyright 1989 Reed Business Information, Inc.

Shipping: US$ 5.07
From United Kingdom to U.S.A.
Destination, rates & speeds

Book Description -. Hardcover. Condition: Very Good. Crystal Express This book is in very good condition and will be shipped within 24 hours of ordering. The cover may have some limited signs of wear but the pages are clean, intact and the spine remains undamaged. This book has clearly been well maintained and looked after thus far. Money back guarantee if you are not satisfied. See all our books here, order more than 1 book and get discounted shipping. Seller Inventory # 7719-9780099722502

Book Description Legend paperbacks 1991-08-01, 1991. Hardcover. Condition: Very Good. Item is in very good condition. If supplemental codes/CDs for textbooks are required please contact us prior to purchasing as they may be missing. Seller Inventory # DS-009972250X-2

Book Description Paperback. Condition: Very Good. The book has been read, but is in excellent condition. Pages are intact and not marred by notes or highlighting. The spine remains undamaged. Seller Inventory # GOR003132358

Book Description Paperback. Condition: Good. The book has been read but remains in clean condition. All pages are intact and the cover is intact. Some minor wear to the spine. Seller Inventory # GOR002930371