Items related to Doctor Dolittle and the Green Canary

Doctor Dolittle and the Green Canary 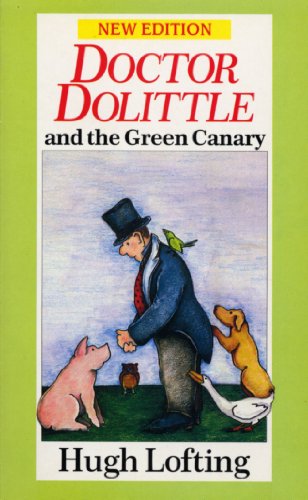 Many of the earliest books, particularly those dating back to the 1900s and before, are now extremely scarce and increasingly expensive. We are republishing these classic works in affordable, high quality, modern editions, using the original text and artwork.

Hugh Lofting was born in Maidenhead in 1886. As a child he kept a miniature zoo and wildlife museum in his mother's linen cupboard and enjoyed making up stories for his family. He later studied engineering in London and the United States, and visited Canada, Africa and the West Indies. After his marriage in 1912 he settled in the United States. Hugh Lofting fought in the trenches during World War I and it was whilst observing the lack of compassion shown to the horses on the battlefields that the idea for Doctor Dolittle was born. He was the main character in letters Hugh sent home from the front to entertain his children. The successful publication of The Story of Doctor Dolittle in 1920 was followed by a further eleven books. In 1923 Hugh Lofting was awarded the Newbery Medal. He died in 1947.

"Doctor Dolittle long ago joined the small band of those chosen by children as worthy of more than casual notice" * Guardian * "Any child who is not given the opportunity to make the acquantance of this rotund, kindly and enthusiastic doctor/naturalist and all of his animal friends will miss out on something important" -- Jane Goodall

Book Description 1992. Paperback. Condition: New. Paperback. Pippinella, the canary with the marvellous voice, tells the Doctor the story of her life. Together with his animal friends, the Doctor determines to find Pippinella's master a.Shipping may be from our Sydney, NSW warehouse or from our UK or US warehouse, depending on stock availability. 320 pages. 0.172. Seller Inventory # 9780099880905