Items related to The British Part in the Korean War: An Honourable Discharge... 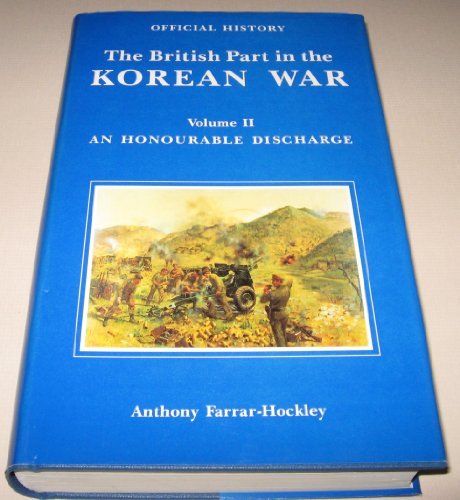 In this volume, General Farrar-Hockley completes the account of Britain's part in the Korean War. From January 1951, when the United Nations' forces seemed about to be overwhelmed by the Chinese Communist Forces, to the armistice in the summer of 1953, he describes the ebb and flow of fortunes on the battlefield and the parallel, sometimes consequential, political activities in the pursuit of a settlement. The involvement of Stalin and the Soviet Union in the War is manifested from evidence unearthed in the Moscow archives. The battles on the Imjin River and at Kap'yong, in which British and Commonwealth troops defeated the Chinese Spring offensive in 1951, are described. The military picture embraces the burdens and adventures of the Royal and Commonwealth Navies on the Korean west coast, and of the lst Commonwealth Division ashore in a semi-static line. The author describes the mistreatment and manipulation by the Chinese and North Korean authorities of the prisoners they held, and those confined by the United Nations. His assessment draws upon the evidence of numerous victims of this operation. As previously, General Farrar-Hockley has had access to all the British documents, released and withheld. "Inter alia", he presents the story within the framework of policy adopted by the successive governments of Mr Attlee and Mr Churchill.

Shipping: US$ 3.05
From United Kingdom to U.S.A.
Destination, rates & speeds

Book Description Stationery Office Books, 1996. Hardcover. Condition: Good. Good condition is defined as: a copy that has been read but remains in clean condition. All of the pages are intact and the cover is intact and the spine may show signs of wear. The book may have minor markings which are not specifically mentioned. Most items will be dispatched the same or the next working day. Seller Inventory # mon0011965265

3. The British Part in the Korean War ~ Volume 2 An Honourable Discharge

Shipping: US$ 11.85
From United Kingdom to U.S.A.
Destination, rates & speeds

4. The British Part in the Korean War: An Honourable Discharge

Book Description Stationery Office 1995-05-01, 1995. Hardcover. Condition: Good. Item is in good condition. Some moderate creases and wear. This item may not come with CDs or additional parts including access codes for textbooks. Might be an ex-library copy and contain writing/highlighting. Seller Inventory # DS-011630958X-3