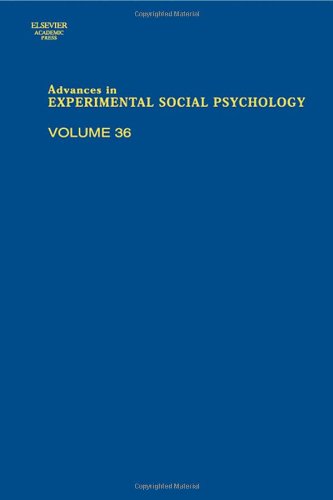 Advances in Experimental Social Psychology continues to be one of the most sought after and most often cited series in this field. Containing contributions of major empirical and theoretical interest, this series represents the best and the brightest in new research, theory, and practice in social psychology.

Mark P. Zanna is a retired University Professor and former Chair of Psychology at the University of Waterloo. He received his BA ('66) and PhD ('70) from Yale University.
Professor Zanna's area of research is the psychology of attitudes. Primarily funded over the years by grants from the Social Sciences and Humanities Research Council of Canada, he has studied attitude structure and function, attitude formation and change, communication and persuasion (including the persistence of persuasion), and the attitude-behaviour relation. He has also conducted research on (a) overcoming resistance to persuasion, including research on subliminal priming and persuasion, self-affirmation and persuasion, and narrative persuasion, and (b) implicit attitudes (i.e., relatively automatic, intuitive evaluations), including research on aversive racists (i.e., those individuals who test low on thoughtful, conscious measures of prejudice, but high on more automatic, intuitive measures of prejudice) and defensive self-esteem (i.e., those individuals who test high on thoughtful, conscious measures of self-esteem, but low on more automatic, intuitive measures of self-esteem). In the domain of health promotion, he has evaluated a 'safer sex' intervention and tested the subtle effects (e.g., on implicit norms) of movie stars' smoking in feature films. Currently, he is investigating the causes and consequences of negative implicit norms toward females in STEM disciplines.
A winner of several career awards for distinguished scientific contribution (D. O. Hebb Award, Canadian Psychological Association, 1993; D. T. Campbell Award, Society of Personality and Social Psychology, 1997; Fellow, Royal Society of Canada, 1999; Inaugural Excellence in Research Award, UW, 2000; Inaugural Distinguished University Professor, UW, 2004; Inaugural Excellence in Graduate Supervision, UW, 2005; Distinguished Scientist Award, Society of Experimental Social Psychology, 2007; K. Lewin Award, Society for the Psychological Study of Social Issues, 2010; Killam Prize Laureate, Canada Council for the Arts, 2011), Professor Zanna has been a consulting editor of the top four journals in social/personality psychology (Journal of Personality and Social Psychology, Journal of Experimental Social Psychology, Personality and Social Psychology Bulletin, and Journal of Personality) plus 7 other journals. Currently, he co-edits the Ontario Symposium on Personality and Social Psychology (since 1981) and the Advances in Experimental Social Psychology (since 1991), the two major edited book series in social psychology. He has also been elected to the presidencies of the two major learned societies in social psychology, the Society of Experimental Social Psychology (1985) and the Society of Personality and Social Psychology (1997). 32 (of 34) of Professor Zanna's doctoral or postdoctoral students have taken academic positions. Six students chaired their respective departments (plus one was the President of a small US college) and 12 others became editors (or consulting editors) of major journals in the field. According to the Web of Science, Professor Zanna's lifetime citations now (February, 2014) exceed 9,500 (h = 50; H = 55). According to Google Scholar, lifetime citations now (February, 2014) exceed 21,200 (h = 74). Finally, Professor Zanna has ranked 12th and 20th worldwide in citations in social psychology textbooks and social psychology handbooks, respectively.