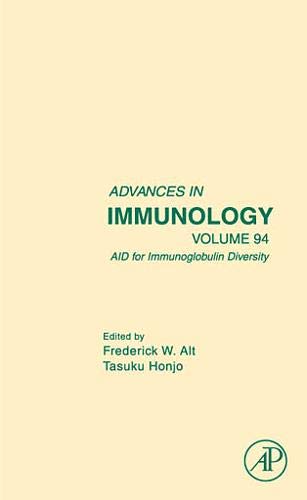 Advances in Immunology, a long established and highly respected serial, presents current developments as well as comprehensive reviews in immunology. Articles address the wide range of topics that comprise immunology, including molecular and cellular activation mechanisms, phylogeny and molecular evolution, and clinical modalities. Edited and authored by the foremost scientists in the field, each volume provides up-to-date information and directions for future research.

Frederick W. Alt is a Howard Hughes Medical Institute (HHMI) Investigator and Director of the Program in Cellular and Molecular Medicine (PCMM) at Boston Children's Hospital (BCH). He is the Charles A. Janeway Professor of Pediatrics and Professor of Genetics at Harvard Medical School. He works on elucidating mechanisms that generate antigen receptor diversity and, more generally, on mechanisms that generate and suppress genomic instability in mammalian cells, with a focus on the immune and nervous systems. Recently, his group has developed senstive genome-wide approaches to identify mechanisms of DNA breaks and rearrangements in normal and cancer cells. He has been elected to the U.S. National Academy of Sciences, the U.S. National Academy of Medicine, and the European Molecular Biology Organization. His awards include the Albert Szent-Gyorgyi Prize for Progress in Cancer Research, the Novartis Prize for Basic Immunology, the Lewis S. Rosensteil Prize for Distinugished work in Biomedical Sciences, the Paul Berg and Arthur Kornberg Lifetime Achievement Award in Biomedical Sciences, and the William Silan Lifetime Achievement Award in Mentoring from Harvard Medical School.

Dr. Tasuku Honjo graduated from Kyoto University Faculty of Medicine in 1966 (M.D.). After obtaining his Ph.D. in Biochimistry (Dr. O. Hayaishi), he spent 4 years in the U.S.A. as a postdoctoral fellow first in Carnegie Institution of Washington (Dr. D. Brown), and then in NIH (Dr. P. Leder) where he initiated studies on immunoglobulin genes. He returned to Tokyo University as an assistant professor in 1974, and then moved to Osaka University School of Medicine as Professor of Genetics in 1979. He succeeded to Dr. O. Hayaishi after his retirement at the Department of Medical Chemistry in Kyoto University. He also served as Dean of Medical School (1996-2000 and 2004-2005), and Executive Member of Council for Science and Technology Policy, Cabinet Office (2006-2012). Currently, he is Professor of Department of Immunology and Genomic Medicine, Kyoto University, and also Chairman of Board of Directors, Shizuoka Prefectural University Corporation.

Dr. Honjo is well known for his discovery of activation-induced cytidine deaminase that is essential for class switch recombination and somatic hypermutation. He has established the basic conceptual framework of class switch recombination starting from discovery of DNA deletion (1978) and S regions (1980), followed by elucidation of the whole mouse immunoglobulin heavy-chain locus. His contribution further extended to cDNA cloning of IL-4 and IL-5 cytokines involved in class switching and IL-2 receptor alpha chain. Aside from class switching recombination, he discovered PD-1 (program cell death 1), a negative coreceptor at the effector phase of immune response and showed that PD-1 modulation contributes to treatments of viral infection, tumor and autoimmunity. In addition, he is known to be a discoverer of RBP-J, a nuclear protein that interacts with the intracellular domain of Notch in the nucleus. Notch/RBP-J signaling has been shown to regulate a variety of cell lineage commitment including T and B cells.

For these contributions, Dr. Honjo has received many awards, including the Noguchi Hideyo Memorial Prize for Medicine (1981), Imperial Prize, Japan Academy Prize (1996), Robert Koch Prize (2012), and Order of Culture (2013). He is an honorary member of the American Association of Immunologists. He has been honored by the Japanese Government as a person of cultural merits (2000). He has also been elected as a foreign associate of National Academy of Sciences, USA in 2001, as a member of Leopoldina, the German Academy of Natural Scientists in 2003, and as a member of Japan Academy in 2005.

Shipping: US$ 10.46
From United Kingdom to U.S.A.
Destination, rates & speeds