Items related to An Introduction to Theories of Personality, Canadian...

An Introduction to Theories of Personality, Canadian Edition 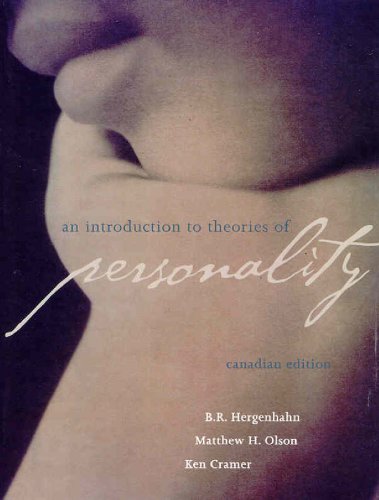 Appropriate for personality courses offered in second or third year in psychology departments at universities across Canada.

This text offers a mainstream, theorist by theorist approach to the study of “personality psychology”. It presents a balance between theory and research. This Canadian adaptation is geared for personality course that emphasize theory, research, or both, giving students and instructors a text that is rich in Canadian content and examples, as well as the latest Canadian research.

This introduction to the theories of personality introduces readers not only to the rich history of psychology but to practical information that helps them understand their own lives and their relationships with other people. Using a theorist-by-theorist approach, the book summarizes the major theories of personality and emphasizes that the best understanding of personality derives from a variety of viewpoints. Thus, theories representing the psychoanalytic, sociocultural, trait, learning, sociological, and existential-humanistic paradigms are offered as different—yet equally valid—ways of approaching the study of personality. Includes a series of experiential exercises. What Is Personality? Sigmund Freud. Carl Jung. Alfred Adler. Karen Horney. Erik H. Erikson. Gordon Allport. Raymond B. Cattell and Hans J. Eysenck. B. F. Skinner. John Dollard and Neal Miller. Albert Bandura and Walter Mischel. Edward O. Wilson. George Kelly. Carl Rogers. Abraham Maslow. Rollo Reese May. For anyone wanting a comprehensive understanding of personality and individual differences.

1. An Introduction to Theories of Personality, Canadian Edition