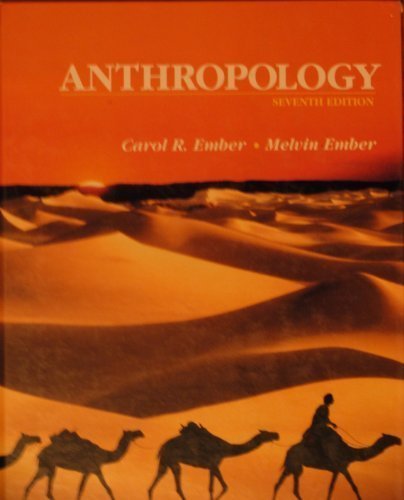 This text includes the most recent research and developments in the field of anthropology. It is a comprehensive account of the theory and practice of the science, and includes updated discussions of DNA and RNA; and relative dating based on stratigraphy and biostratigraphy; and has a new final chapter, "explaining and solving social problems", which relates anthropology to other disciplines and to the solution of problems in the real world.

The Eighth Edition represents the most comprehensive revision to date -- reflecting the most recent anthropological research and controversial developments and integrating new features in each chapter aimed at sparking and maintaining student interest.

Reflecting recent anthropological research and controversial developments, this exceptionally readable, comprehensive introduction to anthropology goes beyond mere descriptions to discuss not only what humans are and were like, but why they got to be that way, in all their variety. A focus on applied anthropology throughout highlights the history and types of anthropology practiced in the Unites States, and shows how the work of applied anthropologists is playing more of a role in the planning of possible solutions to various global social problems. A host of special boxes highlight the cutting edge of the field Current Issues; Research Frontiers; New Perspectives on Gender; Applied Anthropology. What Is Anthropology? How We Discover the Past. Genetics and Evolution. The Living Primates. Primate Evolution: From Early Primates to Hominoids. The First Hominids. The Origins of Culture and the Emergence of Homo.The Emergence of Homo Sapiens. The Upper Paleolithic World. Origins of Food Production and Settled Life. Origins of Cities and States. Human Variation and Adaptation. The Concept of Culture. Theory and Evidence in Cultural Anthropology. Communication and Language. Getting Food. Economic Systems. Social Stratification: Class, Racism, and Ethnicity. Sex, Gender, and Culture. Marriage and the Family. Marital Residence and Kinship. Associations and Interest Groups. Political Life: Social Order and Disorder. Psychology and Culture. Religion and Magic. The Arts. Culture Change. Applied and Practicing Anthropology. Medical Anthropology. Global Social Problems. For anyone interested in an introduction to the latest anthropological research and its practical applications.

Book Description Prentice Hall College Div, 1992. Hardcover. Condition: New. THE BOOK IS BRAND NEW. MAY HAVE MINOR SHELF WEAR.MULTIPLE COPIES AVAILABLE. FAST SHIPPING. WE OFFER FREE TRACKING NUMBER UPON FAST SHIPMENT OF YOUR ORDER. PLEASE LET US KNOW IF YOU HAVE ANY QUESTIONS AND WE WILL GET BACK TO YOU ASAP. Thank you for your interest. Seller Inventory # 0130381837-N