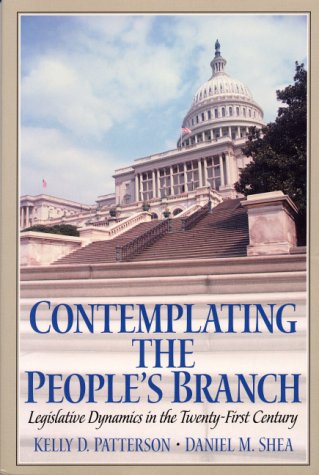 This very accessible book examines theoretical arguments on the nature of representation, the election process, and leadership battles, with a sharp focus on state legislative process and a critical examination of the election process. Articles taken from journals, press, and trade books provide access to scholarship and commentary that will allow readers to make informed judgements about the performance of the U.S. Congress and the various state legislatures.Contemporary Campaigns and Elections. Managing The Legislative Process. The Complex World of Legislative Policy Making. The Fate of Legislative Bodies In America. For anyone who is interested in Congress and state legislatures.

Champions of American-style democracy, both past and present, would be pleased to hear that classes on Congress and the legislative process are among some of the most popular political science offerings on college campuses today. This enduring popularity is somewhat surprising, given the profound changes in the American political system over the last two hundred years-many of which compete with Congress for the attention of scholars and students. Yet, the legislative process continues to beckon students, pundits, and average Americans. Part of this fascination might be due to the realization that the legislative process is our closest link to government-it is, in truth, the "people's branch." Or perhaps the interest is a manifestation of some sort of latent civic spiritedness. That is to say, the legislative process affords us a means to become involved in the public world. As children, we are told that we can all aspire to be president, but as realities set in we look elsewhere to fulfill our civic duties. Indeed, we can become members of a city council, of a state legislature, or of the U.S. Congress.

But there is still another possibility, one that we believe the most plausible: Our interest is drawn to the legislature because this institution represents the heart of the American democratic experience. The legislative process is the center of our political world; it defines the nature and spirit of our political system and what we are as a nation. Capitol Hill and the fifty state legislatures offer us a staggering mix of institutional forces, actors, strategies, and tactics. Here, where the struggle of popular governance is played out, we find the uniqueness of the American system, its greatness, and its failings.

Our proximity to the legislature constantly reminds us of the promise of democratic governance. When we see these institutions in practice we are confronted with the time-honored questions that define our nation's democratic character: What is the role of the citizen in the conduct of government? What are the proper means for selecting public officials? What are the links between public policy and public opinion? What role, if any, should extra-constitutional actors, such as interest groups, parties, and the media, play in the development of public policy? What is the proper role of political elites and to what extent should they consult with the mass public? And finally, what is the nexus between our political and economic system?

With these questions foremost in our minds, the aim of this book is rather simple, and indeed an old tune: While scores of changes continue to mold and redefine the details of the legislative process, the overarching questions surrounding representative assemblies have remained remarkably constant. The issues that simmered during the early years of the Republic remain with us today. So while our society and political system continue to evolve, students and scholars relish the opportunity to seek answers to these perennial questions. They delight in the opportunity to place these questions in a context and a time that differs so dramatically from the dawn of the American experiment. Students of American politics want to know whether the answers offered to those questions by the framers are still relevant for our time and place.

For example, Congress and state legislatures have experienced significant alterations over the years. As the size of our nation has grown and the role of the national government has expanded in the last century, Congress was forced to redefine its internal workings. Specialization replaced inclusive deliberation. Parties have changed the way they recruit and nominate candidates, and today's candidate-centered, service-oriented party system is unique. Leadership dynamics within the chambers evolved as well. In this century, adjustments, from internal rules and campaign reforms to the new demands of the Information Age, have reshaped the job of the representative and of the leader, as well as the nature of the institution. For all these adjustments, however, the core issues of representative government endure. What do we expect from representatives? How should they appeal to voters during elections and what criteria should voters use in choosing a candidate? How can we keep legislative elections fair and accessible to all citizens? How should large representative bodies be organized so that efficiency is optimized and equality of influence is maintained? Which is better, a deliberative assembly or a responsive one? What role should outside actors play in the development of public policy? What legislative reforms would best serve both the legislature and the public?

We are left with a mix of timeless questions and contemporary nuances; the issues remain, but the components of the calculation shift. For most of us who teach the legislative process, this mix of new and old presents a challenge; few texts try to merge these dimensions. The most frequent solution is to assign one text and then supplement it with several secondary texts or handout material. This can be cumbersome and cause confusion both for the students and the instructor. With this in mind, we have designed this reader with the goal of merging classic treatments with contemporary circumstances. Some might argue that the book mixes apples with oranges, and in some respects they would be correct. Thomas Paine, Edmund Burke, and James Madison could not have envisioned television, satellite conferencing, the Internet, nor perhaps even the ascendance of women in politics. But the questions they raised two centuries ago continue to shape our understanding of the legislative process at the dawn of the twenty-first century. Madison would have a lot to say about C-Span, Web pages, and 30-second attack ads.

This book grew out of a passion for studying and teaching the legislative process. We look forward to helping students through the complex maze of representative democracy as they confront the historic questions that strike at the heart of American democracy. Popular impressions about the current generation paint a gloomy portrait. Students, the conventional wisdom states, are aloof and apathetic. Yet when given the opportunity to assess fundamental issues in light of their own situation and their own generation, we find that they realize that the study of the legislative process is a fascinating tour through the soul of the American spirit. We hope that this book makes a modest contribution to the volumes on the legislative process and perhaps quenches some of the curiosity we see in our students.

We have taken a few steps to help the reader appreciate the topics in each of the five broad sections of articles: "Madison Meets the Web: Constitutional Ideals in Modern Society"; "Congressional Elections: Is Getting There Half the Fun?"; "The House Will Come to Order! Managing the Legislative Process"; "Purists and Pragmatists: The Complex World of Legislative Policy Making"; and "Future Shock: The Fate of Legislative Bodies in America." First, we have included extensive introductions to each section, divided roughly into background material and a swift examination of several current tensions. Second, we provide study/review questions at the end of each introductions. These questions might inspire class debate or, at the very least, allow readers to consider several issues as they move forward with the chapters in the section. Finally, important terms have been included at the end of the book in a glossary.