Items related to Crimes and Criminals: A Collection of Case Summaries

Crimes and Criminals: A Collection of Case Summaries 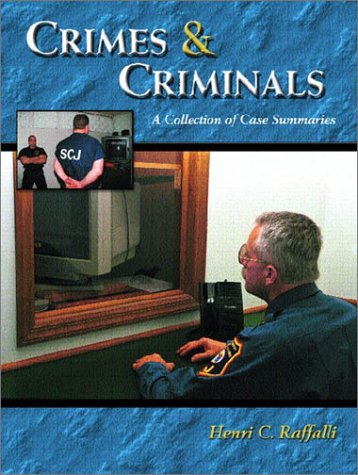 Designed to compel readers to examine and analyze the various criminal justice functions and communicate that analysis effectively, this collection of case summaries enables readers to become familiar with the major different types of crimes and how the criminal justice system deals with them. The cases featured include those involving homicide, robbery, manslaughter, sex crimes, kidnapping, assault, arson, possession of stolen property and larceny, burglary, bribery, falsifying business records, coercion, conspiracy, drugs, and juvenile crime. For those in criminal justice, probation and parole related areas.

Experience — written by a judge for the New York State Division of Parole.

A compelling choice for instructors who want their students to know the realities of probation and parole.

Many of the inmates referred to as subjects in the cases that follow have been released and are now leading law-abiding lives as tax-paying citizens in the community. It would be manifestly unfair to have them identified long after their sentences have been served and their "debts to society" have been paid. By the same token, the victims have already suffered enough. For them to be identified and have to relive their sufferings would be unconscionable. Many or most jurisdictions mandate the confidentiality of parole records.

For these reasons, the cases presented have been "sanitized" to preserve the anonymity of all the parties, perpetrators as well as victims. The names of people and places have been omitted, as have dates and any other items of information that might help identify the case. In some cases, where the notoriety of the facts might identify the people involved, the facts have been altered. Some cases were so complicated that the facts had to be simplified for pragmatic reasons. Indeed, the argument could be made that the cases have been so altered that they are now, in fact, fictitious.

Be that as it may, each case has the basic elements taken from actual ;records and is presented in the format currently in use throughout most probation, parole, and corrections agencies in the United States. Wherever possible the style of the officer writing the report has been retained. Thus, similar information not always listed under the same heading and the content of evaluations ties widely as different officers place different emphasis on similar facts. It is ~t uncommon for two officers to view the same or similar circumstances from different perspectives.

The purpose of this collection, primarily, is to serve as a tool for the criminal slice instructor in the teaching of case analysis and report writing. A secondary purpose is to familiarize the student with the more commonly seen crimes and how the criminal justice system deals with them.

Throughout a 35-year career in criminal justice, I have been struck by the ability of many professionals to enhance their careers through their ability to analyze and evaluate cases and to write clear and concise reports. It is my purpose help this process by giving the student practice in analyzing cases and then in communicating that analysis effectively.

These cases can be presented orally, or they can be assigned for outside work. Reports can be presented by individual students or by study groups, orally or in writing or both. Finally, each oral or written presentation can be critiqued both as to content and as to clarity of expression. Study of cases will enhance the analytical as well as the communication skills of the students. AGKNOWLEDGMENTS

1. Crimes and Criminals: A Collection of Case Summaries

2. Crimes and Criminals: A Collection of Case Summaries

3. Crimes and Criminals: A Collection of Case Summaries

4. Crimes and Criminals: A Collection of Case Summaries