Items related to An Introduction to Theories of Personality

Hergenhahn, B. R.; Olson, Matthew H. An Introduction to Theories of Personality

An Introduction to Theories of Personality 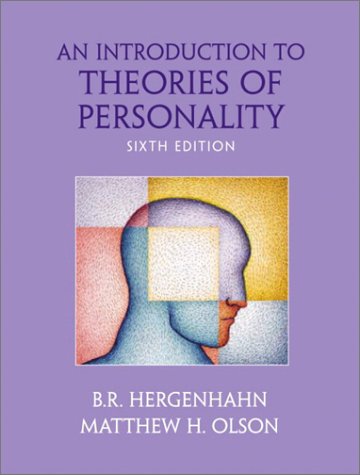 This introduction to the theories of personality introduces readers not only to the rich history of psychology but to practical information that helps them understand their own lives and their relationships with other people. Using a theorist-by-theorist approach, the book summarizes the major theories of personality and emphasizes that the best understanding of personality derives from a variety of viewpoints. Thus, theories representing the psychoanalytic, sociocultural, trait, learning, sociological, and existential-humanistic paradigms are offered as different—yet equally valid—ways of approaching the study of personality. Includes a series of experiential exercises. What Is Personality? Sigmund Freud. Carl Jung. Alfred Adler. Karen Horney. Erik H. Erikson. Gordon Allport. Raymond B. Cattell and Hans J. Eysenck. B. F. Skinner. John Dollard and Neal Miller. Albert Bandura and Walter Mischel. Edward O. Wilson. George Kelly. Carl Rogers. Abraham Maslow. Rollo Reese May. For anyone wanting a comprehensive understanding of personality and individual differences.

In addition to numerous minor changes, several substantial changes were made in the sixth edition of this text and they are summarized below:

The sixth edition of this text continues to reflect our contention that it is in an Introduction to Theories of Personality course that the student experiences the full richness of psychology. In such a course, the student experiences everything from psychology's most rigorous scientists to its most mystical nonscientific thinkers. It is in such a course that the student reviews answers to questions such as: What, if anything, do all human beings have in common? What accounts for individual differences among people? How are the mind and body related? How much of what we call personality is inherited and how much of it results from experience? and, How much of human behavior is determined and how much of it is a function of free will? In such a course, the major theories of human motivation are reviewed and the major schools, paradigms, or "isms" within psychology are sampled: for example, psychoanalysis, behaviorism, humanism, and existentialism. It is in such a course that the student is exposed to the history of psychology, from Freud to the modern theorists, including Erikson, Allport, Cattell, Eysenck, Skinner, Bandura, Mischel, Wilson, Kelly, Rogers, and May. It is also in such a course that students encounter information that helps them make sense out of their own lives and their relationships with other people. Finally, in such a course, the nature of psychopathology and its treatment are explored. What other psychology course covers as much territory? Our answer is none, and therefore it is our belief that if a student were to take only one psychology course beyond the introductory course, it should be an Introduction to Personality course.

Although this text covers topics already mentioned, its main purpose is to summarize the major theories of personality. The text is built around the belief that it is misleading to search for the correct theory of personality. Rather, it is assumed that the best understanding of personality is derived from a variety of viewpoints. Thus, theories representing the psychoanalytic, sociocultural, trait, learning, sociobiological, and existential-humanistic paradigms are offered as different-yet equally valid—ways of approaching the study of personality.

We would like to express our appreciation to the following individuals whose reviews of the fifth edition of this text were helpful as we wrote the sixth edition: Seymour Feshbach, UCLA; Joan Ostrove, Macalester College (MN); Jane Hovland, University of Minnesota; James J. Johnson, Illinois State University and A. M. Prestude, University of Vermont.

We would like to express our thanks to Professors Dorothee Dietrich, R. Kim Guenther, Charles LaBounty, and Robin Parritz, and departmental assistant Alisa Miller, all of whom took on additional responsibilities in the Hamline University psychology department to provide Professor Olson the time needed to work on this text. We would also like to thank Allen Esterson for continuing to share with us his scholarship on the deception involved in Freud's formulation of, and subsequent rejection of, his seduction theory. Finally, we thank Faith Yew who processed several versions of the revised manuscript for this edition and who processed the name index. It is always a pleasure to work with Faith.

1. An Introduction to Theories of Personality