Items related to Biology: A Guide to the Natural World

Krogh, David Biology: A Guide to the Natural World

Biology: A Guide to the Natural World 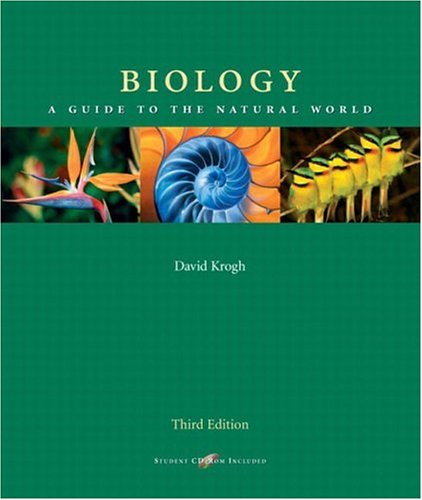 Biology: A Guide to the Natural World remains the only book written and illustrated from the ground up for those with little knowledge of biology. The Third Edition retains its best features—rich, full-color art, an accessible writing style, and a full complement of digital resources—while substantially updating the content throughout to emphasize the relevancy of biology to readers' lives. A seven-part organization covers essential parts: atoms, molecules, and cells; energy and its transformation; how life goes on: genetics; life's organizing principle: evolution and the diversity of life; a bounty that feeds us all: plants; what makes the organism tick? animal anatomy and physiology; and the living world as a whole: ecology and behavior. For the promotion of biological literacy—to make individuals aware that they need it to participate in the workforce, make everyday decisions, and make informed choices at the ballot box.

Ideal for those with a general interest in biology, this book easily draws readers into the material with lots of analogies and stories that help them readily relate biological concepts to others they are already familiar with, and by using a conversational tone that allows them to concentrate on the concepts, rather than struggling with scientific jargon. Media Labs at the end of each chapter includes Web and CD-ROM exercises. Science as a Way of Learning. ESSENTIAL PARTS. The Fundamental Building Blocks: Chemistry and Life. Water, pH, and Biological Molecules. Life's Home: The Cell. Outer Life: The Cell Membrane. ENERGY AND ITS TRANSFORMATION. Life's Mainspring: An Introduction to Energy. Vital Harvest: Deriving Energy from Food. The Green World's Gift: Photosynthesis. HOW LIFE GOES ON: GENETICS. Introduction to Genetics--One Cell Becomes Two: Mitosis and Cytokinesis. Making the Cells for a New Generation: Meiosis. The First Geneticist: Gregor Mendel and His Discoveries. Chromosomes and Inheritance. To the Heart of the Matter: DNA Structure and Replication. How Proteins Are Made: Genetic Transcription, Translation and Regulation. The Future Isn't What It Used to Be: Biotechnology. LIFE'S ORGANIZING PRINCIPLE: EVOLUTION AND THE DIVERSITY OF LIFE. Charles Darwin, the History of Evolutionary Thought, and the Evidence for Evolution. The Means of Evolution: Microevolution. The Outcomes of Evolution: Macroevolution. A Slow Unfolding: The History of Life on Earth. Pond Dwellers, Log Eaters, and Fast Movers: The Diversity of Life. A BOUNTY THAT FEEDS US ALL: PLANTS. Introduction to Plants Plant Structure, Signaling, Defenses and Responses to the Environment. Common Themes in the Green World: Plant Tissues, Growth, Transport, and Reproduction. WHAT MAKES THE ORGANISM TICK? ANIMAL ANATOMY & PHYSIOLOGY. Introduction to Animal Anatomy and Physiology The Integumentary, Skeletal, and Muscular Systems. Control and Defense: The Nervous, Endocrine, and Immune Systems. Transport, Nutrition and Exchange: Blood, Breath, Digestion, and Elimination. An Amazingly Detailed Script: Animal Development. How the Baby Came to Be: Human Reproduction. THE LIVING WORLD AS A WHOLE: ECOLOGY. An Interactive Living World: Populations and Communities in Ecology. An Interactive Living World: Ecosystems and the Biosphere. For anyone interested in an accessile introduction to biology.

David Krogh has been writing about science for 20 years in newspapers, magazines, books, and for educational institutions. He is the author of Smoking: The Artificial Passion, an account of the pharmacological and cultural motivations behind the use of tobacco, which was nominated for the Los Angeles Times Book Prize in Science and Technology. David has written on physics and on technology issues, but his primary interest has been in biology. He has written on the possible effect methane may be having on global warming; on early research into the role that growth factors may play in neural regeneration following injury; on the synthesis of naturally occurring neurotoxins and their possible use in heart disease; on the use of imported drugs to treat cancer; and on the relationship between alcohol and mood states in women. He has a particular interest in the history of biology and in the relationship between biological research and modern American culture. He holds bachelor's degrees in both journalism and history from the University of Missouri.

1. Biology: A Guide to the Natural World

2. Biology: A Guide to the Natural World