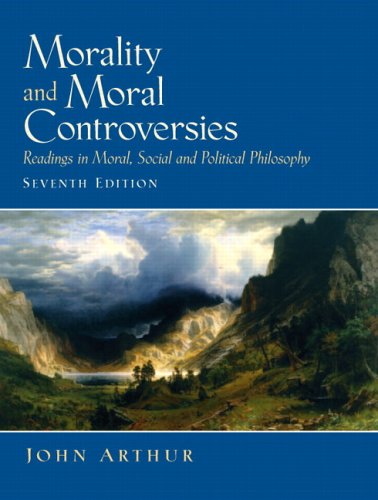 This comprehensive anthology includes classic and contemporary readings in moral theory--a wide array of essays that address today's most philosophically interesting and controversial ethical and political issues. Includes an ethical theory overview; shows relevance of traditional and contemporary writers. KEY TOPICS: Features articles on self-interest and morality, rule utilitarianism and the conflict between duty and sentiment; Features readings on life and death, terrorism, internment in time of war, distribution of scarce medical resources and the survival lottery; Features essays on democracy, capitalism and its ethos, multiculturalism, identity and reparations. Extensive coverage of violence, terrorism, and war, as well as relativism and grounds of morality. MARKET:For those involved in social or political ethical decision making.

This comprehensive anthology includes classic and contemporary readings in moral theory along with a wide array of essays that address today's most philosophically interesting and controversial ethical and political issues. Covering a broad range of topics -- across the entire philosophical and political spectrum -- it shows the relevance of traditional thinkers as well as the many ways that contemporary writers are challenging the limits of the classical works.

John Arthur's widely used, comprehensive anthology, now in its Seventh Edition, includes classic and contemporary readings in moral theory that discuss the role of self-interest and religion in morality, moral relativism, moral truth and objectivity. It includes representatives of traditional moral theories as well as contemporary works on moral theory. Following these are essays that address today's most philosophically interesting and controversial ethical and political issues, from abortion and animal rights to the environment, capital punishment, war, genetic engineering, euthanasia and the distribution of medical resources, sexuality, and marriage and the family. The book also covers many of the central problems of political theory, ranging from the ideal state, patriotism, and civil disobedience, poverty, drugs, and free speech to racial and sexual oppression, multiculturalism, and affirmative action. Covering a broad range of topics this text presents a balanced collection of articles that reflect the breadth of the philosophical and political spectrum. Blending the works of classical and contemporary writers, the text also shows the relevance of traditional thinkers as well as the many ways that contemporary writers expand on or criticize classical works.

New for the Seventh Edition: