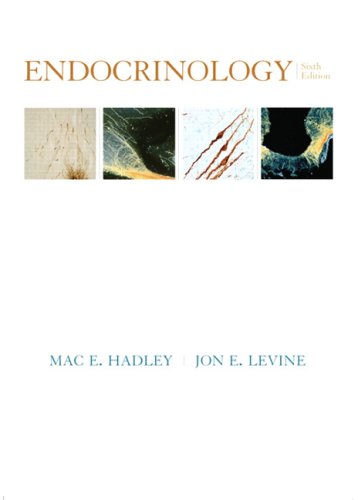 This revision of the classic textbook in endocrinology will offer all of the advantages found in earlier editions of Hadley's "Endocrinology," including clear explanations, interesting applications, and in-depth coverage of vertebrate hormones. In addition, chapters are now presented in a lecture-friendly format, with headers summarizing each of the major concepts. As in earlier editions, basic principles of molecular, cellular, and integrative endocrinology are presented early, along with an updated guide to current research and methodologies. Following chapters contain discussions of each of the major endocrine systems, supplemented with the most important and interesting new information. Neuroendocrine and reproductive systems are the specialty of the new co-author of this edition, and corresponding chapters have been appropriately increased in coverage. Special features of this new edition include... 1. Expanded explanations of bas

Hadley provides an comprehensive coverage of endocrinology, centralizing on the critical roles of chemical messengers and hormones--whether they are of endocrine or neural origin--in the control of physiological processes. This up-t o-date Fourth Edition depicts, through demonstration, the entire human endocrine system in examples designed specifically for premedical and related professional courses. Hadley examines several recently discovered hormones--including their origin , biosynthesis, chemistry, secretion, circulation and metabolism, physiological roles, control of secretion, mechanisms of action and pathophysiology.

The central theme of this text is the role of chemical messengers, or hormones, whether they are of endocrine or neural origin, in the control of physiological processes. Although endocrine physiology has been separated from neurophysiology in the past, it is now amply documented that hormones may originate from either endocrine or neural tissue. Thus has emerged the field of neuroendocrinology. Several eminent endocrinologists have been awarded Nobel Prizes in Physiology/Medicine for their monumental efforts leading to the discovery and elucidation of the chemical structure of several brain neuropeptides (neurohormones); this clearly emphasizes the importance of the concept of neuroendocrine physiology. It is now also realized that the so-called "classical" hormones are produced in many sites throughout the body and may be released directly into the blood, into neuronal synapses, or into the immediate intercellular space to affect adjacent cellular activity. This more inclusive definition of "hormone", therefore, has been employed, as suggested by Nobel laureate Roger Guillemin. The important point emphasized in this definition is that it is both the method of delivery as well as the source of the hormone that is of greatest physiological significance.

In Introduction to Endocrinology, a short chronology of endocrine research is presented. The concept of homeostasis is then discussed with special reference given to the roles of chemical messengers in the control of homeostatic systems. The reader is then provided with a general description of The Vertebrate Endocrine System, wherein an initial working vocabulary is established. Included here is a discussion of the general classes of chemical messengers and other cellular regulators (steroid and peptide hormones, neurohormones, chalones, growth factors, eicosanoids, pheromones); the cellular synthesis of chemical messengers and their secretion, delivery, and metabolism; and a general overview of the physiological role of hormones. In consideration of the various methodologies used in present-day endocrine research, it was considered necessary to add a chapter on Endocrine Methodologies early in the text. Classical surgical and histological techniques are discussed, as are more recent methods including radioimmunoassay, radioreceptor assay, radioisotope enzyme assay, autoradiography, and recombinant-DNA methodologies. It was also considered important to provide, early in the book, a discussion of General Mechanisms of Hormone Action, because these concepts are a necessary component of each of the following chapters. Included within this chapter is a discussion of cellular receptors, cyclic nucleotides as second messengers, prostaglandins (and prostacyclins, thromboxanes, and leukotrienes), stimulus-response coupling, calmodulin (a cellular calcium receptor), and phosphorylated proteins as physiological effectors.

The source, synthesis, chemistry, and general role of the Pituitary Hormones in the control of endocrine physiology are discussed next, because the pituitary gland is a major source of hormones regulating many other endocrine glands. More specific details of the roles and actions of these hormones are provided in subsequent chapters. Because the secretion of each of the pituitary hormones is controlled by hypophysiotropic hormones of hypothalamic origin, a chapter on the role of The Endocrine Hypothalamus is provided. The evidence supporting the neurovascular hypothesis is emphasized.

Chapter 7, Neurohypophysial Hormones, provides a complete coverage of the source, synthesis, chemistry, secretion, metabolism, biological actions, and mechanisms of action of the posterior pituitary hormones, oxytocin and vasopressin. The evolution of hormone structure is emphasized under the comparative endocrinology of neurohypophysial hormones. Chapter 8, The Melanotropic Hormones, emphasizes the recent discovery that pro-opiomelanocortin is the precursor protein of amelanotropin, adrenocorticotropin, and human's own analgesic hormones, the endorphins (opiatelike peptides). The author has done considerable research in the field of melanotropins and vertebrate pigmentation, particularly in relationship to the control of melanocyte-stimulating hormone secretion and the mechanisms of action of the melanotropins. Because the secretion and actions of most all hormones involve the calcium ion, the roles of parathormone, calcitonin, and vitamin D in the Hormonal Control of Calcium Homeostasis are discussed early in the book (Chap. 9).

The next six chapters are grouped together because they all relate to aspects of metabolic endocrinology. The Gastrointestinal Hormones play important roles in the control of foodstuff movement through the gastrointestinal tract and its transport through the intestinal mucosa and into the general circulation. The chapter on Pancreatic Hormones and Metabolic Endocrinology discusses the roles of the endocrine pancreas in the storage and utilization of metabolic substrates. The contrasting roles of insulin and glucagon are explored, as are the possible roles of the newer pancreatic hormones, somatostatin and pancreatic polypeptide. In a chapter on Growth Hormones, the varied roles of the somatomedins and other peptide-growth hormones, such as nerve growth factor, epidermal growth factor, erythropoietin, and the thymic growth factors, as well as growth inhibitory factors (chalones) are discussed, in addition to an in-depth coverage of pituitary somatotropin (growth hormone).

In the chapter on Thyroid Hormones, evidence is marshaled demonstrating that triiodothyronine is the physiologically relevant thyroid hormone at the cellular level. An up-to-date review of a model of thyroid hormone action is provided. A discussion of the integrated functional aspects of Catecholamines and the Sympathoadrenal System provides recent data on the developmental biology of catecholamine biosynthesis within adrenal chromaffin tissue and sympathetic neurons. The physiological roles of catecholamines as mediated through adrenergic receptors (adrenoceptors) is discussed, and the pharmacology of the autonomic nervous system, particularly the sympathoadrenal system, is reviewed. The chapter on the Adrenal Steroid Hormones completes the general discussion of the roles and actions of hormones in the control of metabolic homeostasis. Steroid hormone structure and nomenclature are reviewed. The roles of cortisol, a glucocorticoid, and aldosterone, a mineralocorticoid, are discussed in detail. The pathophysiology of adrenocortical dysfunction provides an in-depth view of the etiological bases for endocrine pathophysiology.

The next five chapters deal with the endocrinology of vertebrate reproductive systems, mostly mammalian systems. In the Endocrinology of Sex Differentiation and Development, the role of the Sry/SRY gene and its product, the testes-determining factor, in the regulation of gonadal differentiation is discussed. The early organizational roles of gonadal steroids in the development of neural centers (e.g., dimorphic nucleus) within the central nervous system, and the activation roles of steroids in CNS function in the adult animal are reviewed. In Hormones and Male Reproductive Physiology, as in Hormones and Female Reproductive Physiology, the origin, synthesis, chemistry, secretion, metabolism, biological roles, and mechanisms of actions of the male and female reproductive hormones are reviewed. A discussion of the pathophysiology of reproductive function in the human male and female provides an insight into the many genetic and congenital defects that affect normal growth and development of the human reproductive systems. In Endocrinology of Pregnancy, Parturition, and Lactation, the roles of hormones in the fertile period of the female are reviewed. Next is included a chapter on the Endocrine Role of the Pineal Gland, which reviews its putative role in reproductive physiology. This chapter is long overdue; the pineal gland is clearly an endocrine organ.

A final chapter devoted to Neurohormones emphasizes the emerging understanding of the importance of neuropeptides to endocrine system function. For example, the discovery and physiological roles of the endorphins, the opiatelike peptides, or "analgesic hormones," are discussed. The role of other newly discovered brain peptides in the control of behavior, including cholecystokinin (or related peptide), is discussed. The recent discovery that certain gases (e.g., nitric oxide, carbon monoxide) are novel neurohormones is reviewed. The neuroendocrinology of extrinsic sensory perception is discussed, particularly as it provides similarities to hormone receptor transduction mechanisms. A general overview of neuroendocrine pathophysiology is provided to emphasize the molecular basis for the endocrinopathies in general. Lastly, the evolution of endocrine systems is discussed.

Generally, each chapter is subdivided as follows: (1) Introduction (which provides a historical perspective to the particular topic), (2) Source, (3) Synthesis, (4) Chemistry, (5) Secretion, (6) Metabolism, (7) Physiological Roles, (8) Mechanism of Action, (9) Pathophysiology (of endocrine dysfunction), and (10) Comparative Endocrinology. Due to space limitations and other considerations the coverage of neuroendocrine physiology generally has been restricted to vertebrates, mainly mammals, particularly the human. Therefore, this book should be of special appeal to preprofessional students in medicine, dentistry, pharmacology, nutrition, nursing, and other related medical or animal sciences. Within each chapter, however, where appropriate, is included a short coverage of comparative endocrinology.

Brand new to this fifth edition of Endocrinology is a set of review questions at the end of each chapter. Answers to these questions are to be found at the end of the book following the last chapter. The questions and answers were provided to the publisher, Prentice Hall, by a professor who has used the textbook for many years. Your input to the relevance of these questions/answers is desired. Submittal of questions that you might wish to be included in the next edition would be greatly appreciated.

References are provided with each chapter, but, because space limitations place a premium on those selected, the most recently available are used. These references will provide the reader with most of the important earlier studies related to a particular topic. The author therefore acknowledges the unreferenced contributions of many investigators in the field of neuroendocrine physiology.

The author appreciates the very informative figures that have been provided for this fifth edition by leading authorities in the field of endocrine physiology. I am particularly grateful to my past students, both in the classroom and the research laboratory, who provided me with an opportunity to develop the thoughts that are now presented in this textbook of endocrinology. The author is indebted to Ms. Danielle (Dani) Dubois for the superb effort she provided in helping formulate this much revised fifth edition.

Helpful criticisms, corrections, or other comments are most welcome and may be addressed to the author.