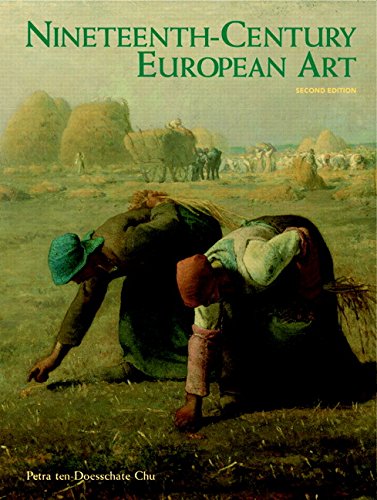 This survey explores the history of nineteenth-century European art and visual culture. Focusing primarily on painting and sculpture, it places these two art forms within the larger context of visual culture–including photography, graphic design, architecture, and decorative arts. In turn, all are treated within a broad historical framework to show the connections between visual cultural production and the political, social, and economic order of the time. Topics covered include The Classical Paradigm, Art and Revolutionary Propaganda In France, The Arts under Napoleon and Francisco Goya and Spanish Art at the Turn of the Eighteenth Century. For art enthusiasts, or anyone who wants to learn more about Art History.

From artists Goya to Monet and Friedrich to Munch, and From the French Revolution to the Industrial Revolution and beyond, author Petra ten-Doesschate Chu charts the fascinating story of nineteenth-century European art and the driving forces that shaped it. The notion of Modernism as the depiction of contemporary life comes to full flower in the nineteenth century, an idea heralded by the painter Gustave Courbet and championed by the Impressionists. Beginning with the painter Edouard Manet another notion of Modernism emerges—one that celebrates surface and texture, signaling a deliberate shift from art aimed at the imitation of nature, and in turn leading to the work of Cézanne and later to twentieth-century abstraction. These and other exciting developments in nineteenth-century European art did not abruptly appear in 1800, but were tied to specific historical events and cultural and artistic trends from about 1760, which the author cogently introduces in the first several chapters of the book.

Alongside the story of Modernism, the author discusses several supporting factors in the history of nineteenth-century European art—the changing relationship between artist and audience; the exposure of European artists to non-Western art due to expanding trade and travel; the impact of new technologies, such as the use of glass and iron in architecture; and changing attitudes about the depiction of nature as influenced by industrialization, ideas about so-called "primitive" cultures and "exotic" lands, and discoveries and developments in the natural sciences (e.g., Darwinism).

References to individual artists' lives enrich the student's understanding of the art, as do sidebars that focus on specific works, techniques, or historical circumstances. The student's appreciation of the period is further enhanced by the author's broad coverage of visual culture, including painting, sculpture, architecture, the decorative arts, and the burgeoning fields of photography and graphic design. A timeline, glossary, and extensive bibliography, listing not only books but also films related to the period, complete this major achievement.

Petra ten-Doesschate Chuis a leading authority on nineteenth-century art. She is a professor in the Department of Art and Music at SetonHallUniversity, and author of many articles and book essays. Managing Editor of Nineteenth-Century Art Worldwide, she is also President of the Association of Historians of Nineteenth-Century Art. Chuis the recipient of numerous awards and scholarships, including two National Endowment for the Humanities Research grants, a Jane and Morgan Whitney Art History Fellowship, and a John Simon Guggenheim Memorial Fellowship. Her other books include French Realism and the Dutch Masters and Courbet in Perspective