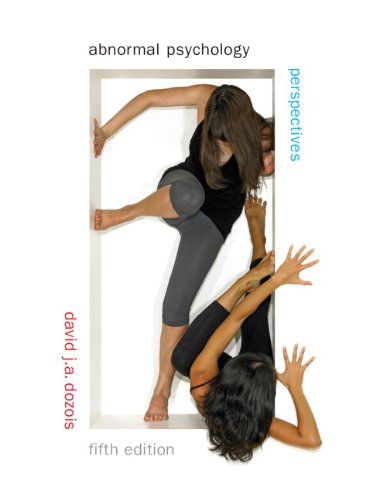 Abnormal Psychology: Perspectives exemplifies its subtitle by cohesively presenting the numerous individual perspectives of its expert contributors. It presents the differing psychological perspectives by discussing various relevant paradigms with emphasis on the conceptual approaches and therapeutic interventions that have garnered the most empirical support in research literature. As a ground-up Canadian text, it features indigenous case studies, legal and ethical issues, prevention programs, and ground-breaking research, as well as the history of abnormal psychology in this country.

The new edition features a new full-colour interior, coverage of the DSM-5 including a disorder-by-disorder comparison with the DSM-IV, three new Canadian contributors, and a new chapter on Sexual Gender Identity Disorder. The organization, level, and features of each chapter have also been standardized to resulting in a more consistent, unified student experience.

David J. A. Dozois, Ph.D., is a Professor of Psychology at The University of Western Ontario in London, Ontario. He completed his undergraduate and graduate studies at the University of Calgary. He is a Fellow of the Canadian Psychological Association (CPA) Section on Clinical Psychology and the Academy of Cognitive Therapy and a former Beck Institute Scholar at the Beck Institute for Cognitive Therapy and Research. Dr. Dozois’ research focuses on cognitive vulnerability to depression and cognitive-behavioral theories/ therapy. He is editor of Cognitive-Behavioral Therapy: General Strategies (in press, Wiley) and co-editor of Prevention of Anxiety and Depression: Theory Research and Practice (2004, American Psychological Association) and Risk Factors in Depression (2008; Elsevier/Academic Press). Dr. Dozois has published over 110 scientific papers and book chapters and has presented over 250 research posters and papers at national and international conferences. Dr. Dozois has received career awards from the Canadian Psychological Association, the Canadian Institutes of Health Research, the National Alliance for Research on Schizophrenia and Depression, and the Ontario Mental Health Foundation. Dr. Dozois teaches Adult Psychopathology at the undergraduate level and courses in systems of psychotherapy and cognitive-behavioural therapy at the graduate level. He has been on the Board of Directors for the Canadian Psychological Association since 2005, serving a term as President (2011-2012). Dr. Dozois is a licensed psychologist, and practices cognitive therapy in London, Ontario.

Concepts of Abnormality Throughout History—Francois B. Botha, Ph.D. candidate, University of Western Ontario

Dissociative and Somatoform Disorders—Rod A. Martin, University of Western Ontario

“A very readable and interesting text, making excellent use of Canadian content, and leaning towards the more clinical side of abnormal psychology....I think the present text has several advantages over the few other texts I have reviewed for adoption. The primary advantage is readability and interest value, both of which see very high in most of the chapters I reviewed. From the point of view of the Canadian market, I also think the text incorporates Canadian content in a much more organic way than some texts, where the Canadian content seems an obvious tack-on to an American version.”

“ Learning objectives are great! Offers clear direction and criterion for learning....I really liked the Before Moving On addition. It forces the reader to make certain they are absorbing the information rather than just mindlessly ploughing through the words. I liked the fact that the questions were not simply 'content' questions, but more thought provoking, challenges to comprehension.... Love the applied clinical case box. Anything that assists the reader in 'experiencing' the issue is great. Focus on pop culture is excellent!...Chapter summaries were well done and VERY helpful. I would love that as a student.”

“As a faculty member at a Canadian university, I can see many advantages to this textbook, but the major advantage is that it’s Canadian from the ground up, as opposed to the Canadian version of an American textbook....I would tell my colleagues that this textbook is a comprehensive, well-written and up-to-date, Abnormal Psychology textbook that is fully Canadian, and entirely appropriate for an undergraduate student audience.”

Book Description Pearson Education Canada. Hardcover. Condition: As New. An apparently unread copy in perfect condition. Dust cover is intact; pages are clean and are not marred by notes or folds of any kind. At ThriftBooks, our motto is: Read More, Spend Less. Seller Inventory # G0133070530I2N00