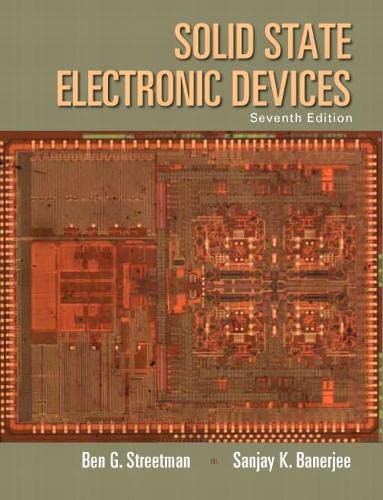 This program will provide a better teaching and learning experience–for you and your students. It will help:

Ben G. Streetman is Dean Emeritus of the College of Engineering at The University of Texas at Austin. He is an Emeritus Professor of Electrical and Computer Engineering, where he held the Dula D. Cockrell Centennial Chair. He was the founding Director of the Microelectronics Research Center (1984—96). His teaching and research interests involve semiconductor materials and devices. After receiving a Ph.D. from The University of Texas at Austin (1966) he was on the faculty (1966–1982) of the University of Illinois at Urbana-Champaign. He returned to The University of Texas at Austin in 1982. His honors include the Education Medal of the Institute of Electrical and Electronics Engineers (IEEE), the Frederick Emmons Terman Medal of the American Society for Engineering Education (ASEE), and the Heinrich Welker Medal from the International Conference on Compound Semiconductors. He is a member of the National Academy of Engineering and the American Academy of Arts and Sciences. He is a Fellow of the IEEE and the Electrochemical Society. He has been honored as a Distinguished Alumnus of The University of Texas at Austin and as a Distinguished Graduate of the UT College of Engineering. He has received the General Dynamics Award for Excellence in Engineering Teaching, and was honored by the Parents’ Association as a Teaching Fellow for outstanding teaching of undergraduates. He has served on numerous panels and committees in industry and government, and several corporate boards. He has published more than 290 articles in the technical literature. Thirty five students of Electrical and Computer Engineering have received their Ph.D. under his supervision.

Sanjay Kumar Banerjee is the Cockrell Chair Professor of Electrical and Computer Engineering, and Director of the Microelectronics Research Center at The University of Texas at Austin. He has more than 900 archival refereed publications and conference papers, 30 U.S. patents, and has supervised 50 Ph.D. students. His honors include the NSF Presidential Young Investigator Award (1988), ECS Callinan Award (2003) and IEEE Grove Award (2014). He is a Fellow of IEEE, APS and AAAS.

Book Description Condition: New. Brand new book. This is an international edition textbook with identical content as the US version. We ship all our orders from CA/IL, USA (depending on your address) and NOT from Asia! Buy with confidence from a 5-star US based seller. Choose expedited shipping for superfast delivery with tracking. Seller Inventory # 9780133356038

Book Description Prentice Hall, 2014. Softcover. Condition: New. (3-5 Days Delivery)***International Edition***Soft cover/Paperback*** Textbook printed in English. ***Brand New***. Most international edition has different ISBN and Cover design. Some book may show sales disclaimer such as "Not for Sale or Restricted in US" on the cover page but it is absolutely legal to use. All textbook arrives within 5-7business days. Please provides valid phone number with your order for easy delivery. Seller Inventory # 9780133356038