Items related to Zen and the Art of the Internet: A Beginner's Guide...

Kehoe, Brendan P. Zen and the Art of the Internet: A Beginner's Guide (Prentice Hall Series in Innovative Technology)

Zen and the Art of the Internet: A Beginner's Guide (Prentice Hall Series in Innovative Technology) 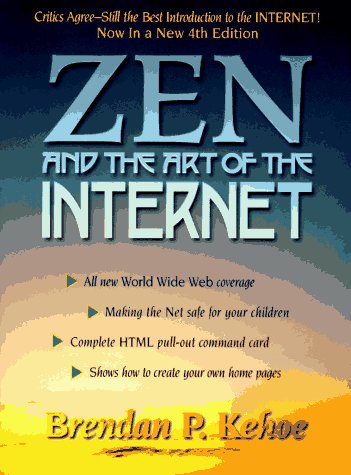 The legendary best-selling Internet introduction, a convenient package that's just as friendly and easy-to-read as ever, is now fully-updated with coverage of the World Wide Web and much more. For years, Internet experts have referred newcomers to this book as the single best way to get started on the Internet. It's one of the few computer books that can truly be called a classic. Now author Brendan Kehoe has completely updated it to reflect the dramatic changes on the Internet.

When historians travel through the records of a century, seek- ing those events that had a pronounced impact on society as a whole, they often find ideas that were originally nothing more than passing thoughts.

Over time, these inspirations grew to effect the daily life of mil- lions of people. The car, the telephone, finding a cure for illnesses like the polio virus, all of these discoveries made a notable impression on the global culture.

What you are now pursuing-this global method of communica- tions known as networking-will been seen to have had a similar effect. Look at our world today: friends staying in touch across the oceans; researchers sharing their results not in terms of days or weeks, but minutes; couples being married after having met in Cyber- space; and most of all, a generation being born to communicating with other nations as if it were a commonplace occurrence.

The uncountable millions of people all becoming involved in this world-wide sharing of information each started out with the curiosity you're now feeling. You've heard the Internet mentioned on TV, in the newspaper, in cartoons, even in every-day conversations. So you've finally decided to "take the leap" and learn how to use this new medium-to see if it meets the grand predictions you've been told.

This book is intended to ease you into this new world. As you go along, you'll find new ways to talk, new ways to think. If you encoun- ter areas of this virtual world that leave you confused or frustrated, don't give up. Odds are you know someone who can explain that par- ticular area to you. And most of all, realize that it's like any other aspect of life; the potential routes are uncountable. Choose your pur- suits carefully, and know that the Internet is used by a community driven by its desire to share information with others. It has grown from an interesting idea by some very influential and creative people, to become a veritable backbone to modern society.

The Internet has come of age.

In the United States, the 1992 Presidential campaign had an unparalleled presence in Cyberspace. Candidates sported email addresses, electronically available position papers, and a heretofore unseen awareness of this "global village." In the former Soviet Union, email was one of the only ways citizens could get information out about the coup against then-President Gorbachev. And MTV is on the Net.

For those who helped build the Internet, its fantastic growth- more than doubling in size each six months-has been both exciting and sobering. Many predict that in only a few years, Internet connec- tivity will be available by right, in much the same way as having access to a telephone is considered a basic necessity.

To someone learning about the Net for the first time, the sheer size of it can be overwhelming. Many people feel a strong urge to panic when they first encounter the Internet, putting it on a list of things to avoid, like learning to program a VCR. I urge you to stick with it and set your own pace. You alone control your learning pro- cess. If you need to, learn to program your VCR first, so you can tape the shows you'll miss when you're traveling through Cyberspace. Then start reading, keeping in mind that in a day or two, you'll have learned enough to actually help others use the Net.

In 1968, just before the birth of what became the Internet, J.C.R. Licklider and Robert Taylor wrote about virtual communi- ties; a quarter of a century later, their words perfectly describe what's happened on the Net.

What will on-line interactive communities be like? In most fields they will consist of geographically separated members, sometimes grouped in small clusters and sometimes working individually. They will be communities not of common location but of common interest.

And thus begins the web.

We've been expecting you. Be careful as you try out your new legs-the ground's firm, but does have some unexpected twists and turns. This book will be your guide through a vast and amazing web of new people, places, and ideas.

Zen is intended for computing novices and experienced research- ers alike. It attempts to remain operating-system "neutral"-little information herein is specific to DOS, Unix, VMS, or any other envi- ronment. In its early stages, this book prompted response from a vast and disparate audience-from librarians to hobbyists to carpenters to Ph.D. physicists. It's my hope that it will be useful to nearly anyone.

Some typographical conventions are maintained throughout. All abstract items like possible filenames, usernames, etc., are repre- sented in italics. Similarly, definite filenames and email addresses are represented in a quoted `typewriter' font. A user's session is usually offset from the rest of the paragraph, as such:

The purpose of this book is twofold: first, it will serve as a refer- ence piece which you can easily grab on-the-fly to look something up. You'll also gain a foundation from which you can explore your sur- roundings at your leisure. Zen and the Art of the Internet doesn't spend a significant amount of time on any one point; rather, it pro- vides enough for people to learn the specifics of what their local sys- tem offers.

One warning is perhaps in order-this territory we are entering can become a fantastic time-sink. Hours can slip by, people can come and go, and you'll be locked in Cyberspace. Remember to do your work!

With that, it's my distinct pleasure to usher you into the Net.

1. Zen and the Art of the Internet

2. Zen and the Art of the Internet

3. Zen and the Art of the Internet: A Beginner's Guide (Prentice Hall Series in Innovative Technology)

4. Zen and the Art of the Internet: A Beginner's Guide (Prentice Hall Series in Innovative Technology) Kehoe, Brendan P.