Items related to Amusing Ourselves to Death

Postman, Neil Amusing Ourselves to Death

Amusing Ourselves to Death 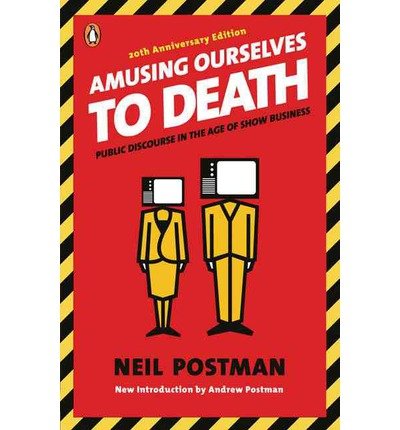 In this eloquent and persuasive book, Neil Postman examines the deep and broad effects of television culture on the manner in which we conduct our public affairs, and how "entertainment values" have corrupted the very way we think. As politics, news, religion, education, and commerce are given less and less expression in the form of the printed word, they are rapidly being reshaped to suit the requirements of television. And because television is a visual medium, whose images are most pleasurably apprehended when they are fast-moving and dynamic, discourse on television has little tolerance for argument, hypothesis, or explanation. Postman argues that public discourse--the advancing of arguments in logical order for the public good, once a hallmark of American culture--is being converted from exposition and explanation to entertainment.

Neil Postman (1931-2003) was chairman of the Department of Communication Arts at New York University and founder of its Media Ecology program. He wrote more than twenty books. His son Andrew Postman is the author of five books, and his work appears in numerous publications.

This McCluhanesque diatribe begins by observing that our present and future resemble the predictions in Brave New World more than those of 1984. Technology, in particular television, has shaped our politics, news, religion, education, every aspect of our world. Rigginbach's reading is a little too fast-paced for this material; furthermore, the material is not suited to an audio format. Why did the author allow his thought to be corrupted by allowing their promulgation through non-print media. In addition, the examples he cites are ten years old; this week's television better supports his conclusions. The message is valid, but the medium through which it's presented is flawed. S.F.W. (c)AudioFile, Portland, Maine