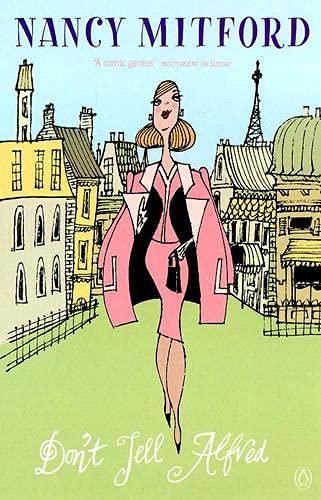 This brilliantly funny novel revisits some of the characters from Nancy Mitford's earlier stories including Fanny, who is married to bumbling, absent-minded Oxford don, Alfred. Fanny is content in her role as a tweedy housewife with 'ghastly' clothes, but her life changes overnight when Alfred is appointed English Ambassador to Paris. Suddenly she is mixing with royalty and Rothschilds, hosting cocktail parties and having details of her every move and outfit printed in the papers. As if that wasn't all more than enough to contend with, she also finds herself dealing with an aristocratic squatter, organising her friends' love lives and keeping track of her maverick sons. All she needs now is a diplomatic crisis...

Nancy Mitford (1904-1973) was born in London, the eldest child of the second Baron Redesdale. Her childhood in a large remote country house with her five sisters and one brother is recounted in the early chapters of The Pursuit of Love (1945), which according to the author, is largely autobiographical. After the war she moved, with her husband, to Paris where she lived for the rest of her life. She followed the success of The Pursuit of Love with Love in a Cold Climate (1949) The Blessing (1951) and Don't Tell Alfred (1960), published together in Penguin as The Nancy Mitford Omnibus. She also wrote four works of biography; Madame de Pompadour, first published to great acclaim in 1954, Voltaire in Love, The Sun King and Frederick the Great.

Book Description Condition: Good. Shows some signs of wear, and may have some markings on the inside. Seller Inventory # 4655628-6

Book Description Condition: Good. Shows some signs of wear, and may have some markings on the inside. Seller Inventory # 4655628-6

Book Description Paperback. Condition: Used; Acceptable. Dispatched, from the UK, within 48 hours of ordering. The book is perfectly readable and fit for use, although it shows signs of previous ownership. The spine is likely creased and the cover scuffed or slightly torn. Textbooks will typically have an amount of underlining and/or highlighting, as well as notes. If this book is over 5 years old, then please expect the pages to be yellowing or to have age spots. Grubby book may have mild dirt or some staining, mostly on the edges of pages. Damaged book. Slightly damaged in some way typically, a grazed corner or torn cover. Seller Inventory # CHL6693919

Shipping: US$ 5.55
From United Kingdom to U.S.A.
Destination, rates & speeds

Book Description Paperback. Condition: Used; Good. **SHIPPED FROM UK** We believe you will be completely satisfied with our quick and reliable service. All orders are dispatched as swiftly as possible! Buy with confidence!. Seller Inventory # mon0001558363

Shipping: US$ 9.51
From United Kingdom to U.S.A.
Destination, rates & speeds

Book Description Condition: Good. Ships from the UK. Shows some signs of wear, and may have some markings on the inside. Seller Inventory # 4655628-6

Shipping: US$ 7.04
From United Kingdom to U.S.A.
Destination, rates & speeds

Book Description Paperback. Condition: Very Good. Don't Tell Alfred This book is in very good condition and will be shipped within 24 hours of ordering. The cover may have some limited signs of wear but the pages are clean, intact and the spine remains undamaged. This book has clearly been well maintained and looked after thus far. Money back guarantee if you are not satisfied. See all our books here, order more than 1 book and get discounted shipping. . Seller Inventory # 7719-9780140019766

Book Description Paperback. Condition: Very Good. Shipped within 24 hours from our UK warehouse. Clean, undamaged book with no damage to pages and minimal wear to the cover. Spine still tight, in very good condition. Remember if you are not happy, you are covered by our 100% money back guarantee. Seller Inventory # 6545-9780140019766