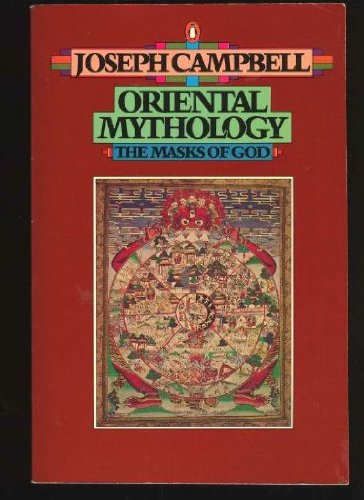 1976 Penguin Books trade paperback, Joseph Campbell (The Power of Myth). In this second volume of The Masks of God - Joseph Campbell's major work of comparative mythology - the pre-emimenent mythologist looks at Asian mythology as it developed over the course of five thousand years into the distinctive religions of Egypt, Mesopotamia, India, China, and Japan.

Joseph Campbell was interested in mythology since his childhood in New York, when he read books about American Indians, frequently visited the American Museum of Natural History, and was fascinated by the museum's collection of totem poles. He earned his B.A. and M.A. degrees at Columbia in 1925 and 1927 and went on to study medieval French and Sanskrit at the universities of Paris and Munich. After a period in California, where he encountered John Steinbeck and the biologist Ed Ricketts, he taught at the Canterbury School, then, in 1934, joined the literature department at Sarah Lawrence College, a post he retained for many years. During the 1940s and '50s, he helped Swami Nikhilananda to translate the Upanishads and The Gospel of Sri Ramakrishna. The many books by Professor Campbell include The Hero with a Thousand Faces, Myths to Live By, The Flight of the Wild Gander, and The Mythic Image. He edited The Portable Arabian Nights, The Portable Jung, and other works. He died in 1987.

"It is impossible to read this startling and entertaining book without an enlarged sense of total human possibility and an increased receptivity—'open-endedness' as Thomas Mann called it—to the still living past."
—Robert Gorham Davis