Items related to Waiting For The Barbarians (King Penguin)

Waiting For The Barbarians (King Penguin) 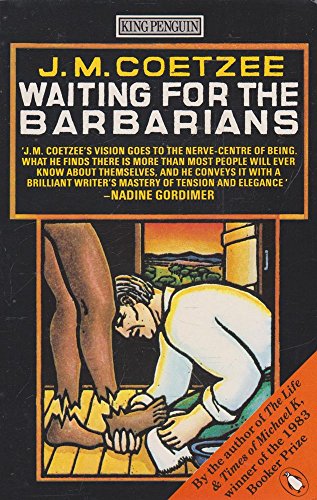 A modern classic by Nobel Laureate J.M. Coetzee. His latest novel, The Schooldays of Jesus, is now available from Viking. Late Essays: 2006-2016 will be available January 2018.

For decades the Magistrate has been a loyal servant of the Empire, running the affairs of a tiny frontier settlement and ignoring the impending war with the barbarians. When interrogation experts arrive, however, he witnesses the Empire's cruel and unjust treatment of prisoners of war. Jolted into sympathy for their victims, he commits a quixotic act of rebellion that brands him an enemy of the state.

J. M. Coetzee's prize-winning novel is a startling allegory of the war between opressor and opressed. The Magistrate is not simply a man living through a crisis of conscience in an obscure place in remote times; his situation is that of all men living in unbearable complicity with regimes that ignore justice and decency.

Mark Rylance (Wolf Hall, Bridge of Spies), Ciro Guerra and producer Michael Fitzgerald are teaming up to to bring J.M. Coetzee's Waiting for the Barbarians to the big screen.

Set in an isolated outpost on the edge of a great Empire, WAITING FOR THE BARBARIANS is a startling allegory of the war between oppressor and oppressed. The Magistrate, the novel's fascinating narrator, has been a loyal servant of the Empire, running the affairs of the frontier settlement, dabbling in antiquarianism, and ignoring constant reports of a threat from the "barbarians" who inhabit the uncharted deserts beyond the village. But when military personnel arrive with captured barbarians, he becomes witness to a cruel and unjust defense of the Empire. Outraged and, with military command controlling his village, powerless to prevent the persecution of the barbarians, he finds himself involved in an affair with one of the victims, a girl crippled, blinded, and orphaned by the torturers. Their relationship, intimate but devoid of true understanding, finally pushes him to a quixotic act of rebellion that brands him an enemy of the state. Rendered in an austere but richly suggestive prose, Coetzee's novel addresses universal political and philosophical issues of power and justice.

"I have known few authors who can evoke such a wilderness in the heart of man. He is an artist of a weight and depth that put him beyond ordinary comparisons...Coetzee knows the elusive terror of Kafka." -- Sunday Times

1. Waiting For The Barbarians (King Penguin)