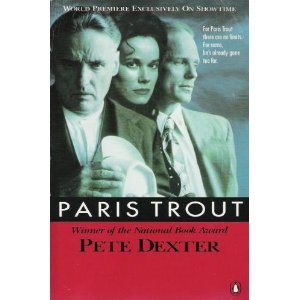 In Cotton Point, Georgia, the murder of a Black girl by a white man, Paris Trout, becomes the catalyst in a tale of obsession, racism, and murder that centers on Trout, an intimidating, unremorseful bully who warps the attitudes of everyone he touches

In this novel of social drama, a casual murder in the small Georgia town of Cotton Point just after World War II and the resulting court case cleave open the ugly divisions of race and class. The man accused of shooting a black girl, a storekeeper named Paris Trout, has no great feeling of guilt, nor fear that the system will fail to work his way. Trout becomes an embarrassment to the polite white society that prefers to hold itself high above such primitive prejudice. But the trial does not allow any hiding from the stark reality of social and racial tensions. Dexter, a former newspaper columnist, is also the author of Deadwood and God's Pocket. Paris Trout won the 1988 National Book Award.

Pete Dexter is the author of the National Book Award–winning novel Paris Trout as well as Spooner, Paper Trails, God’s Pocket, Deadwood, Brotherly Love, and Train. He has been a columnist for the Philadelphia Daily News and the Sacramento Bee, and has contributed to many magazines, including Esquire, Sports Illustrated, and Playboy. His screenplays include Rush and Mulholland Falls. Dexter was born in Michigan and raised in Georgia, Illinois, and eastern South Dakota. He lives on an island off the coast of Washington.