Items related to I Dreamed of Africa

Gallmann, Kuki I Dreamed of Africa

I Dreamed of Africa 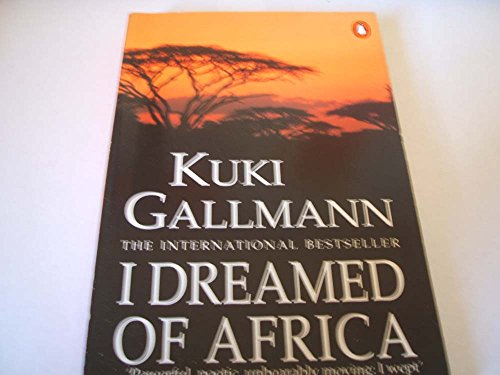 At the age of 25, Kuki Gallmann moved to Kenya with her future husband, where they established a vast ranch. But Africa's beauty does't come without a price, and when tragedy struck, Kuki found herself pregnant and alone with her young son and 90,000 acres of Africa to oversee. 32 pages of photos, half in full color.

Kuki Gallmann was born near Venice and moved to Kenya in 1972 with her husband and young son. Following their deaths, she set up the Gallmann Memorial Foundation to promote new ways of combining development and conservation, and to provide sponsorship for the education of Kenyans. I Dreamed of Africa was first published in 1991 to international acclaim and it became a world-wide bestseller. Her subsequent books, African Nights and Night of the Lions, were also published by Penguin. She lives in Kenya with her daughter and her dogs.

Both a dream fulfilled and personal tragedy are revealed in this moving memoir. As a child living in Italy, the author was fascinated with Africa. Then, in 1972 at 25, divorced and with a young son, she visited Kenya with her then-fiance, Paolo Gallmann. context is absent, with only "at 25" above They settled on a ranch on the Laikipia Plateau at the edge of the Great Rift Valley. With an abundance of nearby wildlife--elephants, rhino, buffalo--the Gallmanns enjoyed an idyllic life among an expatriate community. Then, in 1981, when they were expecting a child, Paolo was killed in a traffic accident. Gallmann gave birth to a daughter, Sveva, and stayed on the ranch with her son, 14-year-old Emmanuele, who died of snakebite three years later. This heartrending account ok, to avoid repetition of "tragedy"? reveals its author's courage and strength. As a living memorial, she started a foundation ok? to avoid repeating "memorial" to explore ways to combine development with conservation. Photos not seen by PW. First serial to Cosmopolitan; author tour.
Copyright 1991 Reed Business Information, Inc.

1. I Dreamed of Africa

2. I Dreamed of Africa Gallmann, Kuki