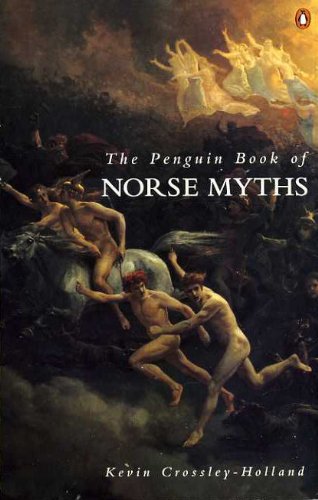 An exploration of the Viking mythology of gods, men, giants, dwarfs, monsters and witches.

Drawing on a wide variety of sources, the author has re-created 32 classic Norse Myths that compete in power with Greek mythology.

Kevin Crossley-Holland is an eminent poet, translator and prize-winning children's author. His translations of Old English poetry are brought together in The Anglo-Saxon World, and he has also translated The Exeter Book Riddles for Penguin Classics. Among his many publications are eight volumes of poetry, various anthologies, including The Oxford Book of Travel Verse and Folk Tales of the British Isles, as well as two operas, a play and a memoir. He was previously Gregory Fellow in Poetry at the University of Leeds, editorial director of Victor Gollancz, Lecturer in Anglo-Saxon Literature and Culture for the Tufts University London program, Fulbright Visiting Scholar at St Olaf College and Endowed Chair in the Humanities and Fine Arts at the University of St Thomas. He is a fellow of the Royal Society of Literature and lives in Norfolk.

1. The Norse Myths: The Gods of the Vikings (Penguin Folklore Library)

Book Description Paperback. Condition: Very Good. The book has been read, but is in excellent condition. Pages are intact and not marred by notes or highlighting. The spine remains undamaged. Seller Inventory # GOR002487074

2. The Norse Myths: The Gods of the Vikings (Penguin Folklore Library)

Book Description Paperback. Condition: Fair. A readable copy of the book which may include some defects such as highlighting and notes. Cover and pages may be creased and show discolouration. Seller Inventory # GOR010177768

Book Description Penguin UK. Paperback. Condition: Fair. A readable copy. All pages are intact, and the cover is intact. Pages can include considerable notes-in pen or highlighter-but the notes cannot obscure the text. At ThriftBooks, our motto is: Read More, Spend Less. Seller Inventory # G0140179933I5N00

5. The Norse Myths: The Gods of the Vikings (Penguin Folklore Library)

Book Description Penguin UK, 1993. Paperback. Condition: Good. All orders are dispatched the following working day from our UK warehouse. Established in 2004, we have over 500,000 books in stock. No quibble refund if not completely satisfied. Seller Inventory # mon0004370763

6. The Penguin Book of Norse Myths: The Gods of the Vikings (Penguin Folklore Library)

Book Description Penguin Books, 1993. Paperback. Condition: Used; Good. **Simply Brit** Shipped with Premium postal service within 24 hours from the UK with impressive delivery time. We have dispatched from our book depository; items of good condition to over ten million satisfied customers worldwide. We are committed to providing you with reliable and efficient service at all times. Seller Inventory # 1267800

Book Description Penguin UK, 1993. Condition: Good. A+ Customer service! Satisfaction Guaranteed! Book is in Used-Good condition. Pages and cover are clean and intact. Used items may not include supplementary materials such as CDs or access codes. May show signs of minor shelf wear and contain limited notes and highlighting. Seller Inventory # 0140179933-2-4

8. The Norse Myths: The Gods of the Vikings (Penguin Folklore Library)

Shipping: US$ 10.44
From United Kingdom to U.S.A.
Destination, rates & speeds