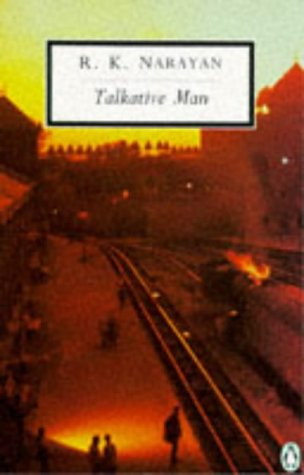 The Talkative Man tells the story of a mysterious stranger who arrives at the Malgudi train station to pursue a purported U.N. project. The stranger winds up staying at Talkative Man's home, where he begins to seduce the librarian's daughter.

R. K. Narayan (1906–2001), born and educated in India, was the author of fourteen novels, numerous short stories and essays, a memoir, and three retold myths. His work, championed by Graham Greene, who became a close friend, was often compared to that of Dickens, Chekhov, Faulkner, and Flannery O'Connor, among others. October 10, 2006, is the centennial of Narayan's birth.

The concluding title story of Narayan's most recent collection, Under the Banyan Tree and Other Stories ( LJ 7/85) , concerned a storyteller who took a vow of silence. As if to assure us that he himself has taken no such vow, Narayan identifies with the title character and raconteur of this, his fourteenth novel of that magical microcosm he calls Malgudi. Talkative Man/Narayan tells us in a postscript that "This is only the story of a wife's attempt to reclaim her erratic, elusive husband who is a wanderer, a philanderer on a global scale. . . ." Readers who have visited Malgudi before will recognize Kabir Street, the Boardless Hotel, and other familiar scenes resonant as ever with the sounds of life and laughter and a whisper of the ludicrous. Newcomers will marvel at this little world and the people in it. L. M. Lewis, Social Science Dept., Eastern Kentucky Univ., Richmond
Copyright 1987 Reed Business Information, Inc.