Items related to The Penguin Essays of George Orwell

The Penguin Essays of George Orwell 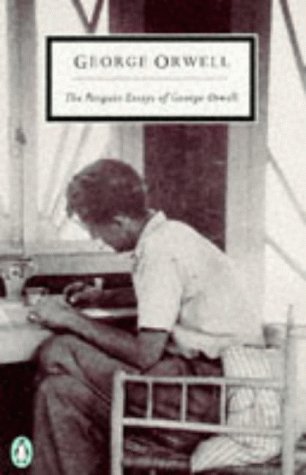 This anthology includes George Orwell's most famous pieces, among them "My Country Right or Left", "Decline of the English Murder" and "How the Poor Die". Orwell writes on a series of wide-ranging topics, from the Spanish Civil War to a defence of English cooking, from Charles Dickens to Rudyard Kipling, P.G. Wodehouse, book reviewing and the nature of socialism.

George Orwell (1903-1950) is one of England's most famous writers and social commentators. He is the author of the classic political satire Animal Farm and the dystopian masterpiece Nineteen Eighty-Four. He is also well known for his essays and journalism, particularly his works covering his travels and his time fighting in the Spanish Civil War. His writing is celebrated for its piercing clarity, purpose and wit and his books continue to be bestsellers all over the world.

"Orwell is the most influential political writer of the twentieth century...He gives us a gritty, personal example of how to engage as a writer in politics." -"New York Review of Books " "[Orwell] evolved, in his seemingly offhand way, the clearest and most compelling English prose style this century...But of course he was more than just a great writer. We need him today because [of] his passion for the truth." -"The Sunday Times "(London) "Had Orwell lived to a full term, he might well have gone on to become the greatest modern literary critic in the language. But he lived more than long enough to make writing about politics a branch of the humanities, setting a standard of civilized response to the intractably complex texture of life." -"The New Yorker" "The real reason we read Orwell is because his own fault-line, his fundamental schism, his hybridity, left him exceptionally sensitive to the fissure-which is everywhere apparent-between what ought to be the casep

Book Description Penguin Classics, 1994. Paperback. Condition: Used; Good. Dispatched, from the UK, within 48 hours of ordering. This book is in good condition but will show signs of previous ownership. Please expect some creasing to the spine and/or minor damage to the cover. Underlining. There is pen or pencil underlining one some pages, however this does not interfere with use. Seller Inventory # CHL5800498

2. The Penguin Essays of George Orwell

3. The Penguin Essays of George Orwell

Book Description Penguin Books, 1994. Paperback. Condition: VERY GOOD. Pages are intact and are not marred by notes or highlighting, but may contain a neat previous owner name. The spine remains undamaged. Supplemental materials are not guaranteed with any used book purchases. Seller Inventory # 0140188037_abe_vg

4. The Penguin Essays of George Orwell

Book Description Penguin Books, 1994. Condition: Good. A+ Customer service! Satisfaction Guaranteed! Book is in Used-Good condition. Pages and cover are clean and intact. Used items may not include supplementary materials such as CDs or access codes. May show signs of minor shelf wear and contain limited notes and highlighting. Seller Inventory # 0140188037-2-4

5. The Penguin Essays of George Orwell

Book Description Penguin Books, 1994. Paperback. Condition: GOOD. Has little wear to the cover and pages. Contains some markings such as highlighting and writing. Supplemental materials are not guaranteed with any used book purchases. Seller Inventory # 0140188037_abe_gd