Items related to A Man on the Moon

Andrew Chaikin A Man on the Moon

A Man on the Moon 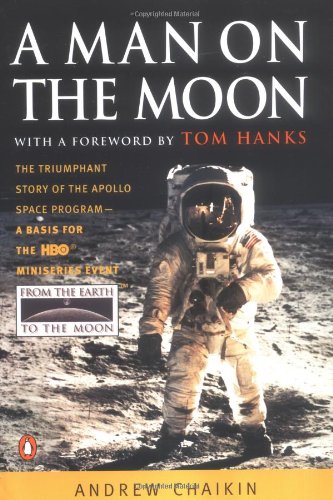 A celebration of the twenty-fifth anniversary of the first moon landing offers an accessible history of the Apollo space program from its less-than-auspicious beginnings, through its greatest triumphs, to its untimely end. Reprint.

A decade in the making, this book is based on hundreds of hours of in-depth interviews with each of the twenty-four moon voyagers, as well as those who contributed their brain power, training and teamwork on Earth. In his preface Chaikin writes, "We touched the face of another world and became a people without limits."

What follows are thrilling accounts of such remarkable experiences as the rush of a liftoff, the heart-stopping touchdown on the moon, the final hurdle of re-entry, competition for a seat on a moon flight, the tragic spacecraft fire, and the search for clues to the origin of the solar system on the slopes of lunar mountains.

"I've been there. Chaikin took me back."--Gene Cernan, Apollo 17 astronaut From the Publisher:

4. A Man on the Moon Andrew Chaikin and Tom Hanks