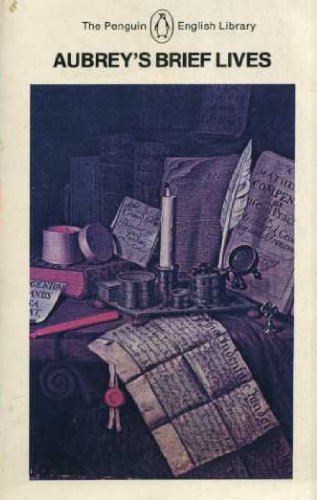 John Aubrey (1626-1697) was the Bystander of his age, a hanger-on and hanger-out at great houses, a country gentleman of lively intellectual curiosity and unsteady character who left not a book to history but a random, sprawling collection of notes, anecdotes, scribbles and morsels of gossip that have been looted and quoted by scholars ever since. So, alongside prostitutes, soldiers, impostors and scholars stand, fully in the round of their humanity, such historical figures as Sir Walter Raleigh, Shakespeare, Wolsey, Sidney, Sir Thomas Moore and Milton. These men and women flawed, vain, ambitious, vulnerable are more alive here than in any formal history; these giants of an age are brought to a human scale, making it possible for the modern reader to feel, in the words of Edmund Wilson who contributes a foreword, what it must have been like to live then, to find oneself a part of an England that was venturesome, unsettled and eager, that was opening new horizons.

Reading Aubrey's Brief Lives is like sitting in a 17th century ale house and listening into the gossip of the day about the dings of both ordinary folk and the gentry alike. This reprint edition of a "time lost classic" is very strongly recommended for personal reading lists, as well as both community and academic library 17th century Biography & History reference collections and supplemental studies lists. --Able Greenspan, Midwest Book Review