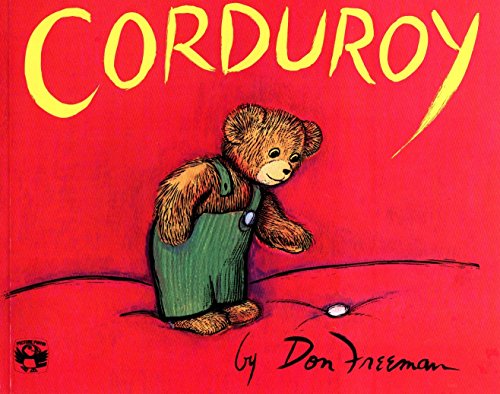 One of School Library Journal’s "Top 100 Picture Books" of all time (2012)
One of the National Education Association’s "Teachers' Top 100 Books for Children."

Don Freeman's classic character, Corduroy, is even more popular today then he was when he first came on the scene in 1968. This story of a small teddy bear waiting on a department store shelf for a child’s friendship has appealed to young readers generation after generation.

Review:
Have you ever dreamed of being locked in a department store at night? The endearing story of Corduroy paints a picture of the adventures that might unfold (for a teddy bear at least) in such a situation. When all the shoppers have gone home for the night, Corduroy climbs down from the shelf to look for his missing button. It's a brave new world! He accidentally gets on an elevator that he thinks must be a mountain and sees the furniture section that he thinks must be a palace. He tries to pull a button off the mattress, but he ends up falling off the bed and knocking over a lamp. The night watchman hears the crash, finds Corduroy, and puts him back on the shelf downstairs. The next morning, he finds that it's his lucky day! A little girl buys him with money she saved in her piggy bank and takes him home to her room. Corduroy decides that this must be home and that Lisa must be his friend. Youngsters will never get tired of this toy-comes-alive tale with a happy ending, so you may also want to seek out Dan Freeman's next creation, A Pocket for Corduroy. (Ages 3 to 8)
About the Author:
Don Freeman was born in San Diego, California, in 1908. At an early age, he received a trumpet as a gift from his father. He practiced obsessively and eventually joined a California dance band. After graduating from high school, he ventured to New York City to study art under the tutelage of Joan Sloan and Harry Wickey at the Art Students' League. He managed to support himself throughout his schooling by playing his trumpet evenings, in nightclubs and at weddings.

He was introduced to the world of children’s literature when William Saroyan asked him to illustrate several books. Soon after, he began to write and illustrate his own books, a career he settled into comfortably and happily. Through his writing, he was able to create his own theater: "I love the flow of turning the pages, the suspense of what's next. Ideas just come at me and after me. It's all so natural. I work all the time, long into the night, and it's such a pleasure. I don't know when the time ends. I've never been happier in my life!"

Book Description Paperback. Condition: New. Language: English. Brand new Book. A picture book classic! One of School Library Journal's "Top 100 Picture Books" of all time (2012) One of the National Education Association's "Teachers' Top 100 Books for Children."Don Freeman's classic character, Corduroy, is even more popular today then he was when he first came on the scene in 1968. This story of a small teddy bear waiting on a department store shelf for a child's friendship has appealed to young readers generation after generation. Seller Inventory # AA99780140501735