Items related to The True Story of the Three Little Pigs: Book &... 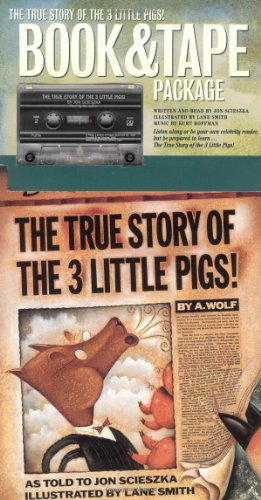 The fairy tale of the "Three Little Pigs" is presented from the humorous perspective of a beleaguered wolf, whose innocent requests to borrow cups of sugar are rendered cataclysmic by a snoutful of unfortunate sneezes. Read by Jon Scieszka. Reissue.

Did the story of the three little pigs ever seem slightly biased to you? All that huffing and puffing--could one wolf really be so unequivocally evil? Finally, we get to hear the rest of the story, "as told to author Jon Scieszka," straight from the wolf's mouth. As Alexander T. Wolf explains it, the whole Big Bad Wolf thing was just a big misunderstanding. Al Wolf was minding his own business, making his granny a cake, when he realized he was out of a key ingredient. He innocently went from house to house to house (one made of straw, one of sticks, and one of bricks) asking to borrow a cup of sugar. Could he help it if he had a bad cold, causing him to sneeze gigantic, gale-force sneezes? Could he help it if pigs these days use shabby construction materials? And after the pigs had been ever-so-accidentally killed, well, who can blame him for having a snack?

As with The Stinky Cheese Man and Other Fairly Stupid Tales, (another stellar collaboration by Scieszka and illustrator Lane Smith), children who know all the old stories by heart will delight in reading impudent new versions. Here, Scieszka's text is clever, savvy, and tabloid-quick, and Smith's stretchy-strange illustrations complete this funny, irreverent, thoroughly original tale. (Ages 4 to 8)

From the desk of Lane Smith:

"A lot of reviewers have misidentified my technique as airbrush or dyes or even egg tempera. I think this is because it almost looks as if it was sprayed with paint with little dots of color and texture visible. Actually, my work is rendered in oil paints. I paint on board, building up several thin glazes of the oil, sealing them between coats with an acrylic spray varnish. This not only dries the oil instantly, but also causes a chemical reaction between the oil and the acrylic. Normally, it would be a mistake to combine two opposites like this and in fact it was a mistake the first time I did it, but I liked the results. I'm a big fan of artists who play with surfaces. I love texture and grunge. The trick is to know when to stop. Sometimes I keep adding more and more layers until I've ruined the piece. Usually I stop when the painting starts to look interesting. Then I go in with a fine brush and add details, lights and darks, etc. It's a laborious process, but it's unpredictable and it keeps me interested and surprised. Of course, I'm influenced by other illustrators too, like N.C. Wyeth, Maurice Sendak, Arthur Rackham, Edward Lear, Gustav Dore and Tomi Ungerer. I hope I can follow the path these dark illustrators have walked, or at least use the sidewalk that runs alongside it."