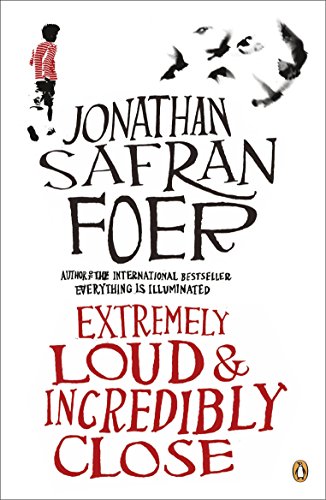 Nine-year-old Oskar Schell is an inventor, amateur entomologist, Francophile, letter writer, pacifist, natural historian, percussionist, romantic, Great Explorer, jeweller, detective, vegan, and collector of butterflies. When his father is killed in the September 11th attacks on the World Trade Centre, Oskar sets out to solve the mystery of a key he discovers in his father's closet. It is a search which leads him into the lives of strangers, through the five boroughs of New York, into history, to the bombings of Dresden and Hiroshima, and on an inward journey which brings him ever closer to some kind of peace.

Jonathan Safran Foer is the author of Everything Is Illuminated, Extremely Loud and Incredibly Close, Eating Animals and Here I Am. He has also edited a new modern edition of the sacred Jewish Haggadah. Everything Is Illuminated won several literary prizes, including the National Jewish Book Award and the Guardian First Book Award. He edited the anthology A Convergence of Birds: Original Fiction and Poetry Inspired by the Work of Joseph Cornell, and his stories have been published in the Paris Review, Conjunctions and the New Yorker. Jonathan Safran Foer teaches Creative Writing at New York University.

I handed him my card and told him,
"Greetings. Gerald. I. Am.
Oskar." He asked me why I was talking
like that. I told him, "Oskar's CPU is
a neural-net processor. A learning
computer. The more contact he has with
humans, the more he learns." Gerald
said, "O" and then he said "K." I
couldn't tell if he liked me or not, so
I told him, "Your sunglasses are one
hundred dollars." He said, "One
seventy-five." "Do you know a lot of curse
words?" "I know a couple." "I'm not
allowed to use curse
words." "Bummer." "What's 'bummer'? "
"It's a bad thing." "Do you
know 'shit'?" "That's a curse, isn't
it?" "Not if you say 'shiitake.' " "Guess
not." "Succotash my Balzac,
dipshiitake." Gerald shook his head and...

Book Description Paperback. Condition: New. Language: English. Brand new Book. THE INTERNATIONAL BESTSELLERADAPTED INTO A FEATURE FILM WITH TOM HANKSFrom the critically acclaimed author of Here I Am, Everything is Illuminated and We are the Weather - a heartrending and unforgettable novel set in the aftermath of the 9/11'Utterly engaging, hugely involving, tragic, funny and intensely moving. A heartbreaker' Spectator'The most incredible fictional nine-year-old ever created. a funny, heart-rending portrayal of a child coping with disaster. It will have you biting back the tears' Glamour'Pulsates with dazzling ideas' Times Literary Supplement'It's a miracle. So impeccably imagined, so courageously executed, so everlastingly moving' Baltimore Sun'Jonathan Safran Foer is a writer of considerable brilliance' Observer In a vase in a closet, a couple of years after his father died in 9/11, nine-year-old Oskar discovers a key.The key belonged to his father, he's sure of that. But which of New York's 162 million locks does it open?So begins a quest that takes Oskar - inventor, letter-writer and amateur detective - across New York's five boroughs and into the jumbled lives of friends, relatives and complete strangers. He gets heavy boots, he gives himself little bruises and he inches ever nearer to the heart of a family mystery that stretches back fifty years. But will it take him any closer to, or even further from, his lost father?. Seller Inventory # AAZ9780141012698

Shipping: US$ 4.30
From United Kingdom to U.S.A.
Destination, rates & speeds

Shipping: US$ 9.68
From United Kingdom to U.S.A.
Destination, rates & speeds