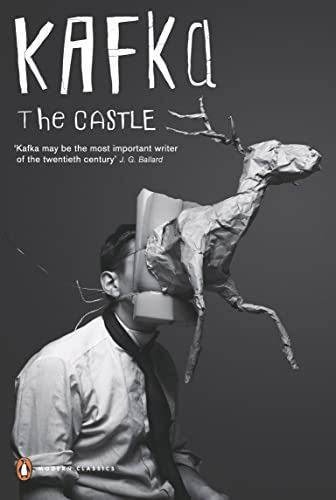 A surreal work of psychological horror, Franz Kafka's The Castle is translated by J. A. Underwood with an introduction by Idris Parry in Penguin Modern Classics. The Castle is the story of K., the unwanted Land Surveyor who is never to be admitted to the Castle nor accepted in the village, and yet cannot go home. As he encounters dualities of certainty and doubt, hope and fear, and reason and nonsense, K.'s struggles in the absurd, labyrinthine world where he finds himself seem to reveal an inexplicable truth about the nature of existence. Kafka began The Castle in 1922 and it was never finished, yet this, the last of his three great novels, draws fascinating conclusions that make it feel strangely complete. Franz Kafka (1883-1924) was a Czech-born German-speaking insurance clerk who despised his job, preferring to spend his time writing. Nevertheless, Kafka published little during his lifetime, and ordered his closest friend to burn the mass of unpublished manuscripts, now familiar to us as some of the most influential novels and short stories of the twentieth century, after his death. Kafka's novels, all published posthumously, include The Trial, The Castle, and Amerika. If you enjoyed The Castle, you might like Kafka's Metamorphosis and Other Stories, also available in Penguin Modern Classics. 'Every time you read The Castle, you find something new in it' Sunday Times 'Kafka discovered the hitherto unknown possibilities of the novel' Milan Kundera 'Kafka may be the most important writer of the twentieth century' J.G. Ballard

They are perhaps the most famous literary instructions never followed: "Dearest Max, my last request: Everything I leave behind me ... in the way of diaries, manuscripts, letters (my own and others'), sketches, and so on, [is] to be burned unread...." Thankfully, Max Brod did not honor his friend Franz Kafka's final wishes. Instead, he did everything within his power to ensure that Kafka's work would find publication--including making some sweeping changes in the original texts. Until recently, the world has known only Brod's version of Kafka, with its altered punctuation, word order, and chapter divisions. Restoring much of what had previously been expunged, as well as the fluid, oral quality of Kafka's original German, Mark Harman's new translation of The Castle is a major literary event.

One of three unfinished novels left after Kafka's death, The Castle is in many ways the writer's most enduring and influential work. In Harman's muscular translation, Kafka's text seems more modern than ever, the words tumbling over one another, the sentences separated only by commas. Harman's version also ends the same way as Kafka's original manuscript--that is, in mid-sentence: "She held out her trembling hand to K. and had him sit down beside her, she spoke with great difficulty, it was difficult to understand her, but what she said--." For anyone used to reading Kafka in his artificially complete form, the effect is extraordinary; it is as if Kafka himself had just stepped from the room, leaving behind him a work whose resolution is the more haunting for being forever out of reach.

Mark Harman's new translation of "The Castle" was the winner of the Modern Language Association's Lois Roth Award (1999). The jury's citation read as follows:

"Mark Harman has produced a worthy successor to the long-established 1930 translation by Edwin Muir and Willa Muir. While maintaining high standards of literal accuracy and employing an English that is contemporary in its vocabulary and idiom, he has also fashioned a style that expressively re-creates Kafka's unsettling blend of the mundane and the unnerving, the wryly comic and the obliquely menacing. Harman's syntax in particular, with its controlled and grammatically subversive use of comma splices, captures the narrative's progressive mood of disorientation and bafflement. Mark Harman's translation has recharged the imaginative energy and impact of Kafka's novel, ensuring that its influence in English-speaking countries will in the next century be as powerful as it has been in this."