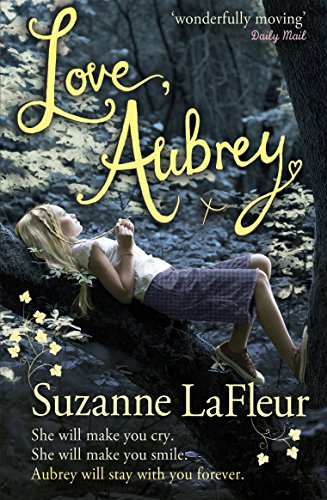 Something terrible has happened. Eleven-year-old Aubrey is on her own. 'It was fun at first, playing house. Nothing to think about but TV and cheese. A perfect world'. She's determined to hide away and take care of herself, because facing the truth is too much to bear. 'I couldn't let anyone know that I was alone. I was staying right here'. But with the love of her grandmother and the letters she writes, can Aubrey begin to see that even though she's lost everything - all is not lost?

At a very young age, Suzanne LaFleur fell in love with stories. She loved stories so much that she decided that if she had to grow up, she would write new stories for kids to read. Love, Aubrey is her first book. Suzanne works with children in New York City and Boston.

It was fun at first, playing house.

I made all my own meals. Crackers and cheese, three times a day.

I watched whatever I wanted on TV, all day.

Then I ran out of cheese.

There wasn't anything left in the freezer. The veggie drawer in the fridge had drippy brown lettuce and stinky carrots. A container of milk sat on the shelf. I opened it. It smelled awful, too, so I put the cap back on and shoved it to the back of the fridge.

I checked my room for snacks. I peeked at the lower shelf of my nightstand, where I had set a plate with two chocolate-covered cookies for Jilly, the way Savannah always did. Jilly's cookies used to disappear, but I couldn't seem to get her to come around anymore. Savannah probably ate the cookies herself. I picked one up and bit it, but it was hard stale.

I had to go shopping. I needed a break from TV anyway. I got some money from my sock drawer, taking just two of the twenty-dollar bills left over from my birthday. It was so long ago, my birthday. On the day I turned eleven, I didn't think I would be using the money in Gram's card to buy my own groceries.

Everything was different now.

I didn't want anyone at the store to notice me, so I put on a hat and sunglasses, like a movie star walking around a city.

I put my backpack on and set out for the grocery store. It was nice to be outside for a change. The summer air felt really hot, though, and soon there was sweat under my hat and running down my face behind the glasses. The disguise wasn't as glamorous as it had seemed.

I was excited to pick out anything I wanted at the store. I went to the aisle with the SpaghettiOs and lifted my sunglasses to examine the cans. I wanted the ones with meatballs. Savannah likes the plain ones. No, she liked--Savannah had liked the plain ones–

I suddenly felt very sick, there in the canned-goods aisle.

But I needed food. I put five cans of SpaghettiOs with meatballs into my buggy.
Because I wanted to run a healthy household, I figured I needed some vegetables. I got two cans of corn and one of green beans. I picked out a box of Cheerios and a half gallon of milk, a loaf of bread and sliced-turkey-and-ham packages, and a bag of apples. I realized my backpack would feel heavy and figured that that was enough to eat, for a few days anyway.

I paid and made it out of the store without anyone recognizing me. I stopped at a bench and zipped the paper grocery bag into my backpack. I adjusted my hat and sunglasses and started to walk home, but that was when I noticed the pet store next to the grocery.

I wasn't on a schedule or anything. I had time to go inside.

A bell jingled on the door as I opened it. The store had a heavy smell of animals and the sounds of many noisy birds chirping.

There were three puppies in glass cages. I pressed my hand to one of the windows and the baby dog jumped against it.

That would be fun, to have a dog.

I took the wad of leftover money out of my pocket and looked at it. The puppies cost hundreds of dollars each. Even the rest of the money in my birthday card wouldn't have been enough.

In the back of the store were tanks of fish. In front of the tanks were rows of individual little bowls, each with one colorful fish inside. The sign said betta fish $3.99.

On the very end of the row of bowls was a blue fish with purple-edged fins. He was looking right at me and waving one of his fins.

I wiggled my finger back at him, and looked at the money in my hand again.
I carefully carried the bowl to the counter. The lady there saw me coming and slapped a container of food down.

"It's two dollars extra," she said.

"That's fine, ma'am." I watched as she moved my fish into a plastic bag, tied it, and handed it to me.

I held his bag carefully in my hand the whole way home.

I had everything I needed to run a household: a house, food, and a new family. From now on it would just be me, Aubrey, and Sammy--the two of us, and no one else.
We'd had a fish before, a goldfish. I found her old bowl with blue pebbles under the kitchen sink. I hummed as I rinsed the pebbles without soap to keep Sammy's water suds-free. I made the water a little warm and dumped Sammy into it with his old water. I set him on my dresser.

"Welcome home," I told him.

Footsteps sounded on the porch. I froze and listened. Mail pushed through the slot. The metal flap slammed shut and I jumped. I caught my breath and tiptoed to the door to look at the mail. It was starting to pile up. I hadn't touched it in four days. A lot of it was still addressed to Gordon Priestly. Dad. A kids' magazine came for Savannah. Highlights. I gave the mail a good kick and went back to the kitchen to make a sandwich.

Book Description 2009. Paperback. Condition: New. Paperback. Something terrible has happened. Eleven-year-old Aubrey is on her own.'It was fun at first, playing house. Nothing to think about but TV and cheese. A perfect world.'She's determined to hi.Shipping may be from multiple locations in the US or from the UK, depending on stock availability. 272 pages. 0.190. Seller Inventory # 9780141327044

Book Description 2009. Paperback. Condition: New. Paperback. Something terrible has happened. Eleven-year-old Aubrey is on her own.'It was fun at first, playing house. Nothing to think about but TV and cheese. A perfect world.'She's det.Shipping may be from our Sydney, NSW warehouse or from our UK or US warehouse, depending on stock availability. 272 pages. 0.190. Seller Inventory # 9780141327044