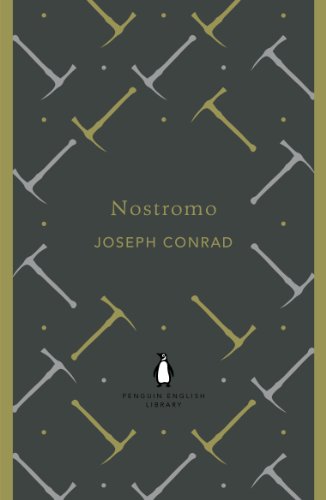 The Penguin English Library Edition of Nostromo by Joseph Conrad 'There is something in a treasure that fastens upon a man's mind. He will pray and blaspheme and still persevere, and will curse the day he ever heard of it, and will let his last hour come upon him unawares, still believing that he missed it only by a foot. He will see it every time he closes his eyes. He will never forget it till he is dead - and even then ...' In the exotic South American republic of Costaguana, the San Tomé silver mine provides opportunities for untold wealth and power. Yet amid the turbulence and brutality of Latin American politics, everyone associated with it - from the compromised English mine-owner Gould to the grasping businessman Holroyd, from the revolutionary Montero to the loyal and seemingly incorruptible worker Nostromo - becomes somehow irrevocably tainted. Nostromo is a grandiose epic, startlingly modern in its technique and political sophistication - and a masterpiece of tension, adventure and mystery. The Penguin English Library - 100 editions of the best fiction in English, from the eighteenth century and the very first novels to the beginning of the First World War.

Joseph Conrad, christened Josef Teodor Konrad, Nalecz Korzeniowski, was born on December 3, 1857, in a part of Russia that had once belonged to Poland. His parents were members of the landed gentry, but as ardent Polish patriots, the suffered considerably for their political views. Orphaned at eleven, Conrad attended school for a few years in Cracow, He soon concluded, however, that there was no future for a Pole in occupied Poland, and at sixteen he left his ancestral home forever.

The sea was Conrad's love and career for the next twenty years. In the French merchant marine, he sailed to the West. Indies, smuggled guns to Spanish rebels, ran into debt, and bungled a suicide attempt Then in the British merchant navy, he rose to first mate and finally to captain, sailing to Australia and Borneo and surviving at least one shipwreck. In 1890 he contracted to become captain of a Congo River steamer, but the six months he spent in Africa led only to disillusionment and ill health; this episode would become the basis for Conrad's masterpiece, Heart of Darkness. Reluctantly leaving the merchant service, he settled in England and completed his first novel, Almayer's Folly, already begun at sea.