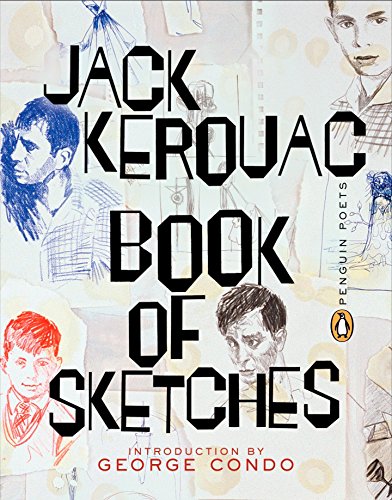 In 1952 and 1953 as he wandered around America, Jack Kerouac jotted down spontaneous prose poems, or "sketches" as he called them, on small notebooks that he kept in his shirt pockets. The poems recount his travels—New York, North Carolina, Lowell (Massachusetts, Kerouac’s birthplace), San Francisco, Denver, Kansas, Mexico—observations, and meditations on art and life. The poems are often strung together so that over the course of several of them, a little story—or travelogue—appears, complete in itself. Published for the first time, Book of Sketches offers a luminous, intimate, and transcendental glimpse of one of the most original voices of the twentieth century at a key time in his literary and spiritual development.

George Condo is a painter and sculptor who has exhibited extensively in both the United States and Europe. He has received an Academy Award from the American Academy of Arts and Letters.

Starred Review. Somewhere between diary, verbal sketchbook and play-by-play account of whatever passed before his eyes, this collection of poems transcribed from notebooks Kerouac kept in his pocket between 1952 and 1954 turns out to rank with his most interesting work. From clipped descriptions of America's underbelly ("a pile of junk, —& the/ girders of the viaduct have / great black bolt heads/ like knobs of a / sweating steel black/ city") to vague hipster prophesying ("The next great con-/ flict will be between/ Hip & Christ"), Whitmanesque embraces of his fellow man ("...I have cared/ for ye dutchmen"), love notes to famous beatnik friends ("O Allen Sad Allen Ah / Mystery") and sad, self-deprecating prayers ("Drink is good for/ love — good for/ music — let it/ be good for writing"), Kerouac hits all the notes for which he and his fellow beats are known. While not everything here is golden, the immediacy and unpretentiousness of this off-the-cuff writing makes it an intimate glimpse into the consciousness of a man who simply couldn't stop observing. A short, aggrandizing introduction by painter George Condo sets the tone. (Apr.)
Copyright © Reed Business Information, a division of Reed Elsevier Inc. All rights reserved.