Items related to The Burn Palace: A Novel

The Burn Palace: A Novel 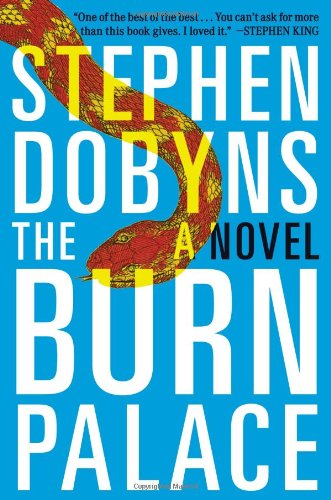 "One of the best of the best...You can't ask for more than this book gives. I loved it." – Stephen King

“An exquisitely unexpected, delightfully believable exploration of what normal looks like when it goes through the (evil) looking glass.” —Oprah.com

The sleepy community of Brewster, Rhode Island, is just like any other small American town. It’s a place where most of its inhabitants will die blocks from where they were born; where gossip spreads like wildfire, and the big weekend entertainment is the inevitable fight at the local bar. But recently, something out of the ordinary—perhaps even supernatural—has been stirring. While packs of coyotes gather and a baby is stolen and replaced with a snake, a series of inexplicably violent acts confounds Detective Woody Potter—and inspires terror in the locals.

A Richard Russo small-town tableau crossed with a Stephen King thriller, The Burn Palace is a darkly funny, twisted portrait of chaos and paranoia that keeps readers guessing until the final pages.

Stephen Dobyns is the author of more than thirty novels and poetry collections. He teaches writing at Warren Wilson College and lives in New England.

Hercel had seen coyotes before, and a week earlier he had seen two in the tall grass down by the beach. And he knew they took people’s pets; kids talked about it in school. They got in people’s trash and skulked around at night. But he had never heard of them chasing anybody. The coyotes’ yapping was almost like singing. Moments later, Hercel saw a light ahead of him through the trees. The coyotes were right behind him. In the bits of silence within their yapping, he heard the click of their nails against the road’s hard surface. Hercel stood up and pedaled harder, slipped off the road but kept his balance. The muscles in his thighs ached, and his fingers hurt from clutching the grips. The light was brighter. Ahead, to the left, he saw a stone wall and then a gate. It had to be the farm. He heard the coyotes panting.  Trying to quiet his terror, he aimed at the wall.

1. The Burn Palace: A Novel