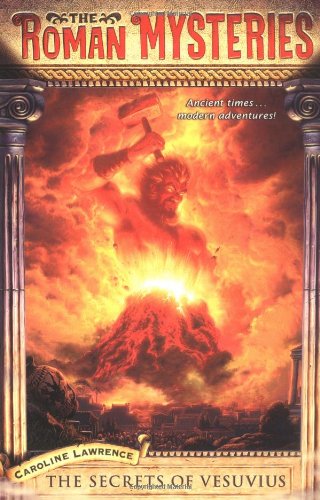 Ten-year-old Flavia and her friends encounter the Roman admiral Pliny before making a journey to her uncle's farm near Mt. Vesuvius, where they try to solve a riddle, reunite a family, and get out of the path of a natural disaster. Reprint.

Caroline Lawrencegrew up in Bakersfield, California, and claims that some of her ancestors were pioneers, teamsters and newspapermen. Caroline moved to England to studyclassics at Cambridge. After a decade of immersing herself in Roman history to write the Roman Mysteries series, Caroline is now mining the rich vein of American history during the tumultuous 1860s. She currently lives in London by the river with her history-loving husband.She is the author of the P.K. Pinkerton series.

Grade 4-7-A mystery set in ancient Rome. When Flavia, Jonathan, Lupus, and Nubia rescue an admiral from a boating accident, he not only rewards them, but he also offers them a riddle that holds the promise of great treasure to anyone who can solve it. He explains that he saw the riddle on the wall of a blacksmith shop and that the blacksmith could help solve it if they can find him. Later, the four friends spend the summer with Flavia's uncle, who lives near Mt. Vesuvius in Pompeii and find Vulcan, the blacksmith. He is an orphan and wants to solve his own mystery of why his parents abandoned him. Just as they are all beginning to figure out these conundrums, the great Vesuvius erupts and they must flee for their lives. The action begins slowly and doesn't really pick up until the volcano starts erupting, about halfway through the book. Also, the mystery element is somewhat confusing and hard to follow. However, the many interesting details about Roman life incorporated into the story provide insight into the period. Readers who are interested in the time as well as fans of the first book in the series, The Thieves of Ostia (Roaring Brook, 2002), may be willing to stick with it until the end.
Kristen Oravec, Cuyahoga County Public Library, Strongsville, OH
Copyright 2002 Reed Business Information, Inc.

Book Description Condition: New. Flavia, Jonathan, Lupus, and Nubia-friends and detectives-sail to the Bay of Naples to spend the summer with Flavia's uncle, who lives near Pompeii. There they uncover a riddle that may lead them to great treasure. Meanwhile, tremors shake the ground, animals behave strangely, and people dream of impending doom. One of the worst natural disasters of all time is about to happen: the eruption of Mount Vesuvius!. Seller Inventory # 9780142401187