Items related to The Grimm Legacy 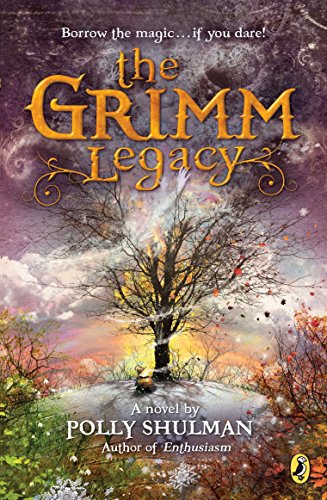 Elizabeth has just started working as a page at the New York Circulating Material Repository - a lending library of objects, contemporary and historical, common and obscure. And secret, too - for in the repository's basement lies the Grimm Collection, a room of magical items straight from the Grimm Brother's fairy tales. But the magic mirrors and seven-league boots and other items are starting to disappear. And before she knows it, she and her fellow pages - handsome Marc, perfect Anjali, and brooding Aaron - are suddenly caught up in an exciting, and dangerous, magical adventure.

Polly Shulman has written about edible jellyfish, Egyptian tombs, infinity, blind dates, books, brains, centenarians, circuses, and cinematic versions of Jane Austen novels, for The New York Times, Discover, Newsday, Salon, Slate, Scientific American, Archaeology, and The Village Voice, among others. She edits news stories about fossils, meteors, the ocean, the weather, and the planets for Science magazine. She collects Victorian jewelry made of human hair, puts cayenne pepper in her chocolate cookies, and reads forgotten books with frontispieces. She is an alumna of Yale University, where she majored in math. She grew up in New York City, where she lives with her husband.

Starred Review. Grade 6–9—Feeling left out from her stepfamily at home and from her classmates at her new school, Elizabeth is delighted when she gets a job at the New York Circulating Material Repository, a library that loans objects of historical value. She's particularly intrigued when she's given access to the Grimm Collection, a secret room that holds magical objects from the Brothers' tales, e.g., seven-league boots, a mermaid's comb, and the sinister mirror from "Snow White." However, when the items start to disappear, she and her fellow pages embark on a dangerous quest to catch the thief, only to find themselves among the suspects. This modern fantasy has intrigue, adventure, and romance, and the magical aspects of the tale are both clever and intricately woven, from rhyming charms to flying-carpet rides. The author brings the seemingly disparate elements together in the end, while still making certain that her protagonist's problems are not completely solved by the world of magic. Shulman's prose is fast paced, filled with humor, and peopled with characters who are either true to life or delightfully bizarre. Fans of fairy tales in general and Grimm stories in particular will delight in the author's frequent literary references, and fantasy lovers will feel very much at home in this tale that pulls out all the stops.—Nancy Menaldi-Scanlan, formerly at LaSalle Academy, Providence, RI
Copyright © Reed Business Information, a division of Reed Elsevier Inc. All rights reserved.

4. The Grimm Legacy (Paperback or Softback)

Book Description Paperback. Condition: New. Paperback. Elizabeth has just started working as a page at the New York Circulating Material Repository - a lending library of objects, contemporary and historical, common and obscure. And secret, to.Shipping may be from multiple locations in the US or from the UK, depending on stock availability. 352 pages. 0.249. Seller Inventory # 9780142419045