Items related to Between Shades of Gray

Sepetys, Ruta Between Shades of Gray 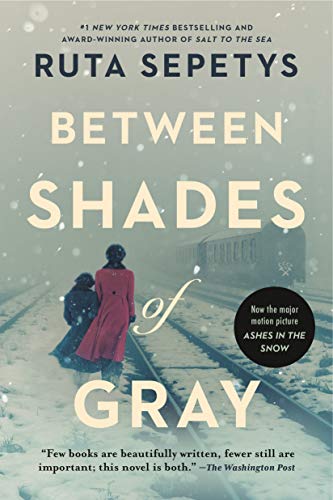 An international bestseller, a #1 New York Times bestseller, and now a major motion picture! Ruta Sepetys's Between Shades of Gray is now the film Ashes in the Snow!

"Few books are beautifully written, fewer still are important; this novel is both." --The Washington Post

From New York Times and international bestseller and Carnegie Medal winner Ruta Sepetys, author of Salt to the Sea, comes a story of loss and of fear -- and ultimately, of survival.

Fifteen-year-old Lina is a Lithuanian girl living an ordinary life -- until Soviet officers invade her home and tear her family apart. Separated from her father and forced onto a crowded train, Lina, her mother, and her young brother make their way to a Siberian work camp, where they are forced to fight for their lives. Lina finds solace in her art, documenting these events by drawing. Risking everything, she imbeds clues in her drawings of their location and secretly passes them along, hoping her drawings will make their way to her father's prison camp. But will strength, love, and hope be enough for Lina and her family to survive?

A moving and haunting novel perfect for readers of The Book Thief.

Praise for Between Shades of Gray:

"Heart-wrenching . . . an eye-opening reimagination of a very real tragedy written with grace and heart." --The Los Angeles Times

"At once a suspenseful, drama-packed survival story, a romance, and an intricately researched work of historial fiction." --The Wall Street Journal

About the Author:
Ruta Sepetys (www.rutasepetys.com) is an internationally acclaimed, #1 New York Times bestselling author of historical fiction published in over sixty countries and forty languages. Sepetys is considered a "crossover" novelist, as her books are read by both teens and adults worldwide. Her novels Between Shades of Gray, Out of the Easy, and Salt to the Sea have won or been shortlisted for more than forty book prizes, and are included on more than sixty state award lists. Between Shades of Gray was adapted into the film Ashes in the Snow, and her other novels are currently in development for TV and film. Winner of the Carnegie Medal, Ruta is passionate about the power of history and literature to foster global awareness and connectivity. She has presented to NATO, to the European Parliament, in the United States Capitol, and at embassies worldwide. Ruta was born and raised in Michigan and now lives with her family in Nashville, Tennessee. Follow her on Twitter @RutaSepetys and Instagram @RutaSepetysAuthor.
Excerpt. © Reprinted by permission. All rights reserved.:
Chapter 1:

They took me in my nightgown.
Thinking back, the signs were there—family photos burned in the fireplace, Mother sewing her best silver and jewelry into the lining of her coat late at night, and Papa not returning from work. My younger brother, Jonas, was asking questions. I asked questions, too, but perhaps I refused to acknowledge the signs. Only later did I realize that Mother and Father intended we escape. We did not escape.
We were taken.
June 14, 1941. I had changed into my nightgown and settled in at my desk to write my cousin Joana a letter. I opened a new ivory writing tablet and a case of pens and pencils, a gift from my aunt for my fifteenth birthday.
The evening breeze floated through the open window over my desk, waltzing the curtain from side to side. I could smell the lily of the valley that Mother and I had planted two years ago. Dear Joana.
It wasn’t a knocking. It was an urgent booming that made me jump in my chair. Fists pounded on our front door. No one stirred inside the house. I left my desk and peered out into the hallway. My mother stood flat against the wall facing our framed map of Lithuania, her eyes closed and her face pulled with an anxiety I had never seen. She was praying.
“Mother,” said Jonas, only one of his eyes visible through the crack in his door, “are you going to open it? It sounds as if they might break it down.”
Mother’s head turned to see both Jonas and me peering out of our rooms. She attempted a forced smile. “Yes, darling. I will open the door. I won’t let anyone break down our door.”
The heels of her shoes echoed down the wooden floor of the hallway and her long, thin skirt swayed about her ankles. Mother was elegant and beautiful, stunning in fact, with an unusually wide smile that lit up everything around her. I was fortunate to have Mother’s honey-colored hair and her bright blue eyes. Jonas had her smile.
Loud voices thundered from the foyer.
“NKVD!” whispered Jonas, growing pale. “Tadas said they took his neighbors away in a truck. They’re arresting people.”
“No. Not here,” I replied. The Soviet secret police had no business at our house. I walked down the hallway to listen and peeked around the corner. Jonas was right. Three NKVD officers had Mother encircled. They wore blue hats with a red border and a gold star above the brim. A tall officer had our passports in his hand.
“We need more time. We’ll be ready in the morning,” Mother said.
“Twenty minutes—or you won’t live to see morning,” said the officer.
“Please, lower your voice. I have children,” whispered Mother.
“Twenty minutes,” the officer barked. He threw his burning cigarette onto our clean living room floor and ground it into the wood with his boot.
We were about to become cigarettes.

Between Shades of Gray Paperback

Between Shades of Gray (Paperback or Softback)

Between Shades of Gray Format: Paperback

Between Shades of Gray (Paperback)

Book Description Paperback. Condition: new. Paperback. A moving and haunting novel for readers of &quot;The Book Thief&quot; Fifteen-year-old Lina is a Lithuanian girl living an ordinary life&mdash;until Soviet officers invade her home and tear her family apart. Separated from her father and forced onto a crowded train, Lina, her mother, and her young brother make their way to a Siberian work camp, where they are forced to fight for their lives. Lina finds solace in her art, documenting these events by drawing. Risking everything, she imbeds clues in her drawings of their location and secretly passes them along, hoping her drawings will make their way to her father&#039;s prison camp. But will strength, love, and hope be enough for Lina and her family to survive? This powerful tale of heartbreak and hope is sure to haunt readers long after they finish the last page. Sepetys presents a powerful and haunting novel based on a little-known real-life event in history. OIn terrifying detail, Ruta Sepetys re-creates a World War II coming-of-age all too timely today. &quot;Between Shades of Gray&quot; is a document long overdue.O&mdash;Newbery Medalist Richard Peck. Shipping may be from multiple locations in the US or from the UK, depending on stock availability. Seller Inventory # 9780142420591