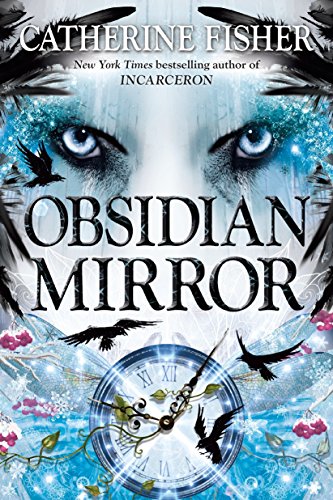 The obsidian mirror. Its power is great and terrible. Men have been lost in it, the dead brought back to life through it, and the future annihilated by it. Or this is what will happen unless the mirror is destroyed. Three people seek the mirror: the first has been sent from the future to shatter its power; the second will protect the mirror at all costs, obsessed with its power; and the third needs the mirror to find a murdered father and save his life. But only one can succeed.

The mirror can send you to the past, but it will not bring you back.

With superb world-building that includes the real world, the faery world, and a dystopic future, this hauntingly astonishing adventure is the start of a new trilogy from the master of the sci-fi/fantasy genre, Catherine Fisher. Fans of Orson Scott Card, Shakespeare, Grimm, and Blade Runner won't be disappointed.

Catherine Fisher (www.catherine-fisher.co.uk and www.incarceronbook.com) acclaimed poet and novelist, was born in Newport, Wales. She graduated from the University of Wales with a degree in English and a fascination for myth and history. She was named the first Children’s Laureate of Wales and was invited to Buckingham Palace to meet Queen Elizabeth. She is the author of the critically acclaimed and New York Times bestselling books Incarceron and Sapphique.

Gr 6 Up-In an exciting opening chapter, Jack Wilde's plan to get kicked out of boarding school works perfectly. He is sent to his wealthy guardian's home in the English countryside, where he plans to confront his guardian and godfather, Oberon Venn, about his father's disappearance. The teen suspects Venn of murder, but discovers that the truth is far more complicated. Venn, his butler, and numerous cats rattle around in Wintercombe Abbey, working on experiments with the Chronoptika, an ancient device that allows people to travel through time. The machine's history is murky and there are no instructions as to its safe use. Sarah, a young woman with her own secrets and interests in the Chronoptika's power, joins the household. A scarred man, an evil Replicant, and a Time Wolf prowl around, and the Wood surrounding the Abbey is full of hidden dangers. There is a notebook that communicates with the future, and in the Wood, the Shee add a Celtic fairy element to the story. The plot is told from varying points of view and set in different times. During his time travels, Jack trails his father to 1848 London, where he is befriended by a street urchin before being sucked back to the present. Sarah, in turn, is from a future that will be desolate if she does not complete her mission. The several interesting story lines have their moments, but the many loose ends make it clear that this trilogy opener is not meant to stand alone.-Maggie Knapp, Trinity Valley School, Fort Worth, TXα(c) Copyright 2013. Library Journals LLC, a wholly owned subsidiary of Media Source, Inc. No redistribution permitted.

Book Description Paperback. Condition: New. Paperback. Shipping may be from multiple locations in the US or from the UK, depending on stock availability. 378 pages. 0.363. Seller Inventory # 9780142426777