Items related to The Apprenticeship of Duddy Kravitz: Penguin Modern... 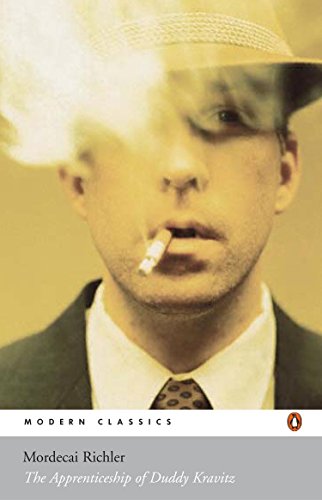 From Mordecai Richler, one of the greatest satirists, comes one of literature's most delightful characters, Duddy Kravitz -- in a novel that belongs in the pantheon of seminal twentieth century books. Duddy -- the third generation of a Jewish immigrant family in Montreal -- is combative, amoral, scheming, a liar, and totally hilarious. From his street days tormenting teachers at the Jewish academy to his time hustling four jobs at once in a grand plan to "be somebody," Duddy learns about living -- and the lesson is an outrageous roller-coaster ride through the human comedy. As Richler turns his blistering commentary on love, money, and politics, The Apprenticeship Of Duddy Kravitz becomes a lesson for us all...in laughter and in life.

The Apprenticeship of Duddy Kravitz is the novel that established Mordecai Richler as one of the world?s best comic writers. Growing up in the heart of Montreal?s Jewish ghetto, Duddy Kravitz is obsessed with his grandfather?s saying, ?A man without land is nothing.? In his relentless pursuit of property and his drive to become a somebody, he will wheel and deal, he will swindle and forge, he will even try making movies. And in spite of the setbacks he suffers, the sacrifices he must make along the way, Duddy never loses faith that his dream is worth the price he must pay. This blistering satire traces the eventful coming-of-age of a cynical dreamer. Amoral, inventive, ruthless, and scheming, Duddy Kravitz is one of the most magnetic anti-heroes in literature, a man who learns the hard way that dreams are never exactly what they seem, even when they do come true.

Mordecai Richler (1931-2001) was a Canadian author, scriptwriter, and essayist. Born and raised in Montreal, Quebec, in his early years he lived and wrote in England but returned to Canada in 1972. He was the author of ten novels, including Barney's Version (1997), Solomon Gursky Was Here (1989), Cocksure (1968), and The Apprenticeship of Duddy Kravitz (1959), as well as numerous screenplays, essays, children's books, and several works of non-fiction. Ann-Marie MacDonald is a writer, playwright, and actor. Her first novel, Fall on Your Knees, won the Commonwealth Writers' Prize for Best First Book, and was selected for Oprah's Book Club. Her second novel, The Way the Crow Flies, won the Canadian Booksellers Association Libris Award. She lives in Toronto.

2. THE APPRENTICESHIP OF DUDDY KRAV