Items related to The Trespasser: A Novel

French, Tana The Trespasser: A Novel 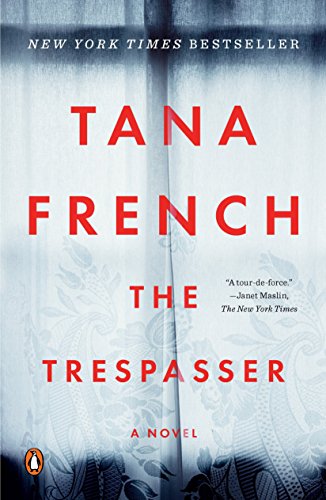 The bestselling novel by Tana French, author of The Witch Elm, is “required reading for anyone who appreciates tough, unflinching intelligence and ingenious plotting” (The New York Times). She “inspires cultic devotion in readers” (The New Yorker) and is “the most important crime novelist to emerge in the past 10 years” (The Washington Post).


In bestselling author Tana French’s newest “tour de force” (The New York Times), being on the Murder Squad is nothing like Detective Antoinette Conway dreamed it would be. Her partner, Stephen Moran, is the only person who seems glad she’s there. The rest of her working life is a stream of thankless cases, vicious pranks, and harassment. Antoinette is savagely tough, but she’s getting close to the breaking point.

Their new case looks like yet another by-the-numbers lovers’ quarrel gone bad. Aislinn Murray is blond, pretty, groomed-to-a-shine, and dead in her catalog-perfect living room, next to a table set for a romantic dinner. There’s nothing unusual about her—except that Antoinette’s seen her somewhere before.

And that her death won’t stay in its neat by-numbers box. Other detectives are trying to push Antoinette and Steve into arresting Aislinn’s boyfriend, fast. There’s a shadowy figure at the end of Antoinetteʼs road. Aislinnʼs friend is hinting that she knew Aislinn was in danger. And everything they find out about Aislinn takes her further from the glossy, passive doll she seemed to be.

Antoinette knows the harassment has turned her paranoid, but she can’t tell just how far gone she is. Is this case another step in the campaign to force her off the squad, or are there darker currents flowing beneath its polished surface?

An Amazon Best Book of October 2016: Detectives Steve Moran and Antoinette Conway are now partners on the Murder Squad. They’ve been handed a case that at first looks like every other low-energy domestic they’ve ever been given--but during a routine interview, the murdered woman’s friend drops a clue that leads them to suspect this could be bigger than they had imagined. Much bigger. Contentious squad room politics add to their frustration as the detectives are led in conflicting directions by red herrings, dead ends, and warped perceptions. The Trespasser kept me happily discombobulated, guessing at an ending that I didn’t see coming. And that is what makes Tana French one of the best thriller writers out there. --Seira Wilson, The Amazon Book Review

Tana French is also the author of In the Woods, The Likeness, Faithful Place, Broken Harbor and The Secret Place. Her books have won awards including the Edgar, Anthony, Macavity, and Barry awards, the Los Angeles Times Award for Best Mystery/Thriller, and the Irish Book Award for Crime Fiction. She lives in Dublin with her family.