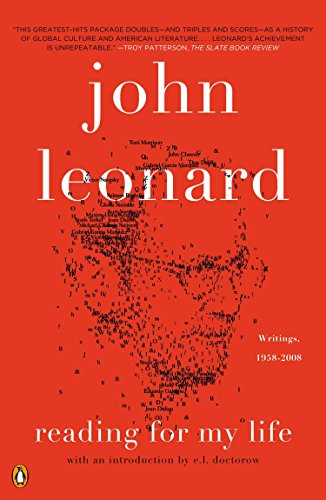 John Leonard was a lion of American letters. A passionate, erudite, and wide-ranging critic, he helped shape the landscape of modern literature. Reading for My Life is a monumental collection of Leonard's most significant writings—spanning five decades—from his earliest columns for the Harvard Crimson to his final essays for the New York Review of Books. Definitive reviews of Doris Lessing, Joan Didion, Toni Morrison, Don DeLillo, Vladimir Nabokov, and Philip Roth, among others, display Leonard's encyclopedic knowledge of literature and make this book a landmark achievement from one of America's most beloved and influential critics.

John Leonard (1939–2008) was a reviewer or contributing editor for practically every national print outlet, including the Nation, the New York Review of Books, Harper's Magazine, Vanity Fair, Salon, and New York Magazine, and a daily book reviewer for the New York Times. He also appeared regularly on NPR's Fresh Air and CBS Sunday Morning. Leonard wrote four novels and served for four years as the executive editor of the New York Times Book Review.

E. L. Doctorow holds the Lewis and Loretta Glucksman chair in English and American Letters at New York University. His novels include Ragtime, which received the first National Book Critics Circle Award for fiction in 1976, The Book of Daniel, City of God, and The March.

“Leonard could write in the style of a man who has brought a scimitar to a knife fight. . . . This greatest-hits package doubles—and triples and scores—as a history of global culture and American literature, as a shadow canon and an intellectual history. . . . Because the culture has shattered—chaos, heat, fractals—Leonard’s achievement is unrepeatable.”

“There was more than a touch of the poet in John Leonard, alongside the cheerful investigator. . . . Let's be grateful for this eloquent sample of his writings, rescued from the dust of past periodicals.”

“A brilliant collection of writings on politics, social and cultural engagement and literary life. . . . Read this book for its insights into Philip Roth, Joan Didion and Michael Chabon. . . . But even more, read it for its passion, its sense that criticism can take us to the heart of everything: aesthetic, emotional, spiritual, political.”

“As a writer, Leonard was often virtuosic in the vein of the New Journalism, but with more heart; as a thinker, he was both confident and aware of the follies of confidence. He could be charmingly self-deprecating, gently bemused, or (more frequently) unapologetically angry. . . . He paid his fellow writers the great compliment of his fully engaged (even if enraged) attention.”

"No one but John could bring the honor he brought—the respect, the illumination, the sheer catch-your-breath brilliance—to whatever got his attention, whether it was a book or a piece of political folly or the day's most unthinkable news. He made the connections no one else thought of making. He made the impenetrable lucid, transparent. He was quite simply our most thrilling observer."

“Great fun to read. . . . Leonard commands love and devotion.”—The Daily Beast
"One of the beauties of literature is that it reminds us that life is still, and always, there to be lived. John Leonard is not with us anymore, yet he's with us forever. He writes with his heart on fire. He wakes us up out of our ease. He disturbs and he soothes and he provokes. He's a gentleman. A scholar. A national treasure. Literature would not be the same without him. He understood—and therefore understands—what goes on at the coalface of language."

“Nobody could write a book review like John Leonard. I don’t know if anybody ever will. . . . The essays collected here will rekindle your love of the book review—and of books themselves. . . This was how one ought to write about books . . . : with naked passion, unabashed intellectualism and, above all, that elusive, unteachable quality called grace. . . . Leonard has such a capacious mind that it could leap from television to books to the theater to the movie screen without ever so much as slipping. Above all, he endowed his words with vitality—that is the greatest lesson one can learn from his work.”

“An excellent collection, a greatest hits of glossolalia. . . . Town crier, troubadour, and street preacher—Leonard managed to be all at once. With him, a single sentence could turn into a high-wire act.”

“A prolific, wide-eyed, and deeply erudite observer of the passing contemporary scene, equally at home writing about sitcoms and Nobel laureates. . . . Leonard was not only a brilliant critic, he was also a superb reporter. . . . Leonard was always writing about something larger than what he was writing about. . . . His love of good writing is not only infectious, it’s also mind-expanding because his tastes were so elastic and catholic. . . . John Leonard was a writer of such consummate grace, wit, and provocation that it doesn’t matter what he settled on as his subject.”

“[John Leonard’s] ecstatic, exhaustive, amassing—enthusiastic!—sentences, nestled in the pages of The New York Review of Books or Harper’s or The New York Times, were a delight to me for many years. I’m even more delighted to have so many of them in one place.”

"'Extraordinary' is indeed the word for that man. He did as much service to letters in this country as anyone, and he did so with a protean, omnivore's flair. We shall not see his like again."

“This book’s fantastic. . . . You should buy this book and have it in your life in exactly the same way you should have the Everyman edition of Orwell and Didion. . . . The thing that makes Leonard’s books such infinite things is how deeply he believed in literature.”—The Kenyon Review

“Leonard (1939–2008), long-time reviewer for and sometime editor of the New York Times Book Review, displays an astonishing erudition throughout these pieces. . . . There is often a playfulness—an informality—in his prose. . . . Leonard could also bring tears at unexpected moments. . . . Glistening evidence that a great critic needs both a bookworm’s habits and a capacious heart.”

“Exhilarating. . . . [Leonard’s] erudition on a dizzying array of subjects--flashing like fireworks in lists that sometimes stretch to 30 or more references--is never offered for its own sake. Instead, it fuels the infectious enthusiasm of Leonard's standing invitation to join him on a roller-coaster ride in the amusement park of contemporary culture. . . . The vitality of Leonard's prose helps his incisive criticism withstand the passage of time.”

“Reading For My Life has many, many memorable high points. . . . [Leonard] had a way of taking on the big books other critics found intimidating and methodically taking them apart, often dispassionately, to see what made them tick, to lay out in front of himself the bedrock urges that sprang the thing into being in the first place. He found nothing too recondite, and he could not be cowed (he used to say he had more eyes than a housefly, and everything he saw strengthened what he knew). . . . It feels very strange, still, not to have John Leonard’s voice still going strong in the back-of-the-issue book pages of all the nation’s magazines, but this anthology is some consolation at least.”

“The late John Leonard was brilliant, witty, earnest, brave, erudite, stubborn, poetic and totally smitten by literature. . . . His work reflected his soul. . . . Reading for My Life . . .  remind[s] us that essays can be as diverse and creative as novels and poems — sometimes more so — and that criticism is more than just a matter of what one admires or despises. . . . At its best, criticism is a passionate engagement with another imagination.”

“[John Leonard] was more than one of the most influential critics of our age. . . . Leonard was the critic who helped us make the most sense of postwar, midcentury American writers and their postmodern successors. His lyrical and deeply erudite reviews and essays read like ebullient jazz riffs on pages designed for tasteful adagios. To read John Leonard is to engage in a Vulcan mind-meld in which the tumble of information and insight is so one-sided as to leave the reader exhausted from the effort of pretending to hold up one's end of the conversation. His judgments never failed to exude a generosity of spirit, even while administering a much-needed slap of critical evenhandedness.”

Book Description Penguin Putnam Inc, United States, 2013. Paperback. Condition: New. Reprint. Language: English. Brand new Book. John Leonard was a lion of American letters. A passionate, erudite, and wide-ranging critic, he helped shape the landscape of modern literature. Reading for My Life is a monumental collection of Leonard's most significant writings--spanning five decades--from his earliest columns for the Harvard Crimson to his final essays for the New York Review of Books. Definitive reviews of Doris Lessing, Joan Didion, Toni Morrison, Don DeLillo, Vladimir Nabokov, and Philip Roth, among others, display Leonard's encyclopedic knowledge of literature and make this book a landmark achievement from one of America's most beloved and influential critics. Seller Inventory # BTE9780143122906