Items related to The Year of Past Things

Harper, M. A. The Year of Past Things

The Year of Past Things 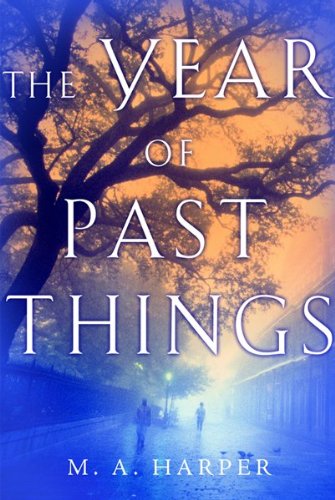 Phil Randazzo, owner of the trendy Tasso Restaurant in New Orleans, is being haunted and he's not at all happy about it. Strange supernatural events are taking place in the home he shares with his new wife, Michelle. Michelle's late husband, the legendary Cajun musician A. P. Savoie, begins to appear at will and inhabit everyday objects. As Savoie's presence grows stronger, the couple asks for help-psychics and exorcists are consulted until Phil narrowly escapes a deadly accident. Clearly, the honeymoon is over; but what, if anything, does Savoie want from them?

In The Year of Past Things, the acclaimed author of The Worst Day of My Life, So Far has conjured up a savvy ghost story with a healthy helping of New Orleans flair.

M. A. Harper is the author of the novel The Worst Day of My Life, So Far. She lives in New Orleans, Louisiana.

"CASPER CUT UP ALL NIGHT LONG," Nicole started complaining the next morning. "That's why I'm too sleepy to eat, Mom."

Michelle pointed at her daughter's uneaten eggs, yellow goo, dammed on one side of the plate by congealing white grits. "What you heard was Hendrix cutting up. He was a very bad kitty. Now hurry up and finish, if we're going."

Nicole scrubbed at her face and made small mewing noises and then searched behind her for the fat cat lying on the bricked floor. "Hendrix can have my eggs. Hendrix loves eggs."

"Who wants seconds?" his stepson called from the kitchen where he lounged at the hot griddle, spatula twirling among the fingers of his right hand. Hot oil droplets leaped unnoticed from the spatula, spattering Michelle's folk art terra-cotta candlesticks on the little windowsill over the sink. "Mom?"

Michelle bent from her chair to wave her fingers in a summons and the cat got up to trot over and push his head into the palm of her hand. He purred very loudly, and Phil, who had never known or cared for cats before, tolerated this one only because its presence in the family predated his own. He watched with no interest as his wife and the animal mutually discovered the exact spot underneath the furry fat chin that held ecstasy. Michelle's fingers probed and the cat stretched out his broad neck, leaning hard into her fingertips. The transaction seemed, to Phil, a lot like sex.

Phil turned his head and noticed what the spatula was doing. "Don't twirl it like that, Cam."

Michelle swiveled to look up and back.

His fifteen-year-old stepson stood silhouetted against the light from the glass pane of the front door, spatula stilled now but held straight up in readiness in an almost military pose. Cam's forearm was still childishly smooth, not yet ridged with any veins, but you could almost see him growing. He was blond like Michelle, tall like her. He shared some of her mannerisms, Phil was discovering, plus that cool reserve that sometimes masked emotion but on other occasions was merely the indifference that it looked like. There was no way yet to tell which was which early enough in any given situation for Phil to automatically formulate a correct response, but he was forgiven when he got it wrong. Just as he always forgave both mother and son for being hard to read.

"What?" The spatula moved.

She turned in her seat. "I dislike shouting in the morning!"

Phil stood, hands splayed on the tabletop on both sides of the handwoven Guatemalan cloth place mat he didn't particularly like. "I'll get it. He's got the gas grill on. It makes noise."

Cam's athletic shoes thudded down the three varnished wooden steps from the kitchen's level. He sloshed a half-full carafe rapidly past Phil's ear and began to top off Michelle's cup, and Phil leaned to one side to keep from getting his cheek burned when Cam pulled back his arm, careless but not hostile. When Phil looked up and met Cam's eyes, he couldn't recognize anything in the kid's facial expression except inquiry. Cam voiced it: "How'm I doing, Phil?"

"'S'good. Real good. My compliments to the chef."

She pushed back her plate and looked up at him and smiled. That smile was one of Phil's favorite things about her, and he was still discovering good things. Those delicate lines underneath her eyes made her appear very kind whenever she smiled, punctuating the curve of her mouth with generosity. Phil thought and hoped that she was, in truth, a very kind person.

She was also a classic beauty, even at this time of morning, even without the cosmetics that she rarely wore, even at this middle age that he shared with her but wasn't sure he was adjusting to yet. He wasn't sure just how well she was adapting to it, either. When her kids were out of the way, Phil could put Jimmy Buffett or the Temptations on the CD player without suffering from Cam's derision, and he and Michelle would share wine and nostalgia and compare their high school days and college experiences.

What great cheekbones she still had, and a complexion like porcelain, even with the damage inflicted by all of that long-ago Yucatán sun. Underneath the rough Guatemalan cotton of her loose dress hid perfect breasts. Phil began to think about her breasts.

"Breakfast was delightful." She looked up at her son, wrapping one long and thin arm around his upper thighs, and Cam didn't seem at all embarrassed by her embrace. He leaned his body against her face and shoulder. "Two chefs in this family." Her grin was for Phil now, and she rubbed his shin under the table with her bare toes. "Double the pleasure."

"So when can I go to work with you, Phil?" Cam bantered. "How much will you pay me?"

"You got the whole rest of your life," he drained his coffee cup, "to go to work."

"You cooked with your dad."

"What makes you think I got paid?"

Cam sat down at the table and reached for all three of the remaining slices of French toast, dumping them onto his own plate. Phil saw Michelle open her mouth to say something but she closed it again. Amazing how much food this kid could wolf down. They pay no attention to what they put in their mouths, these kids, and most of it's junk, he thought. Hypes them up and clogs their arteries, if they don't get any exercise. Cam doesn't get enough exercise. All he does is lie on his bed and play Nintendo.

"Nicole," Michelle spoke to her daughter, "you haven't eaten a thing."

"But your brother slaved over a hot stove all morning, sweetheart. To make this delicious breakfast. You could show him how much you appreciate it, couldn't you?"

The child's face twisted itself into a grimace. She rubbed at her cheeks with both hands, pushing the powdered sugar from her French toast up into her hairline. "I ate some of it. Look."

"Three bites of French toast won't keep you going all day long," Phil told her. "Nothing but sugar. You need to finish that hen fruit, Nick."

But Michelle contradicted him. "Well, we could always get McDonald's on the way, I guess. I know she'll eat a Happy Meal. All that trick-or-treat candy last night . . ."

Excuse me, Phil thought, sitting back, careful to keep his mood in neutral, I still don't know all the rules around here. "Well, you did make some big haul last night, for real," he nodded at the small girl in affirmation. "That purple princess costume must've gone over real well with the neighbors."

She glanced at him for a moment, frowned, and then decided to ignore him. "Casper cut up all night, Mom! I'm too tired to go see Mamère!"

"I thought you wanted to go. Skip school. It's me who doesn't want to go."

"I plan on going, Mom," Cam reminded her, an edge to his voice. "Nicole did, too, the little weasel, when we decided. Weeks ago. Isn't that right, Phil?"

"I'm not getting in the middle of this, y'all. I don't know anything about it."

"But you know we're going to Bois Sec, right?"

"Okay, then." Cam sat back, satisfied, and folded his arms across his chest. "Phil's planned on us going. Even Casper would expect us to go."

"Mamère hasn't seen you in a long time, though, Nick, remember." Michelle's white hand brushed the dark hair back from the child's forehead. "Maybe she'd like to see how big you are now. You could take your colored pencils. And paper. And draw everybody."

"And we're not going just to see Mamère," Cam added, standing, wiping his mouth and then his buttery fingers on a paper napkin. "Me, I'm going mainly for Dad. Because that's what we said we'd do. And because this is the day you're supposed to go and say the prayers. Right?"

"I'm under that impression," said Michelle, "but I'm only nominally Catholic."

All rights reserved. No part of this publication may be reproduced or transmitted in any form or by any means, electronic or mechanical, including photocopy, recording, or any information storage and retrieval system, without permission in writing from the publisher.

Requests for permission to make copies of any part of the work should be
mailed to the following address: Permissions Department, Harcourt, Inc.,
6277 Sea Harbor Drive, Orlando, Florida 32887-6777.

1. The Year of Past Things

2. The Year of Past Things

3. THE YEAR OF PAST THINGS

4. The Year of Past Things: A New Orleans Ghost Story

Book Description Orlando, Florida, U.S.A.: Harcourt, 2004. Hardcover. Condition: New. Dust Jacket Condition: New. 1st Edition. Book Description: Phil Randazzo, owner of the trendy Tasso Restaurant in New Orleans, is being haunted and he's not at all happy about it. Strange supernatural events are taking place in the home he shares with his new wife, Michelle. Michelle's late husband, the legendary Cajun musician A. P. Savoie, begins to appear at will and inhabit everyday objects. As Savoie's presence grows stronger, the couple asks for help-psychics and exorcists are consulted until Phil narrowly escapes a deadly accident. Clearly, the honeymoon is over; but what, if anything, does Savoie want from them? In The Year of Past Things, the acclaimed author of The Worst Day of My Life, So Far has conjured up a savvy ghost story with a healthy helping of New Orleans flair. About the Author M. A. Harper is the author of the novel The Worst Day of My Life, So Far. She lives in New Orleans, Louisiana. Seller Inventory # ABE-855523021