Items related to Lipstick on the Host

Lipstick on the Host 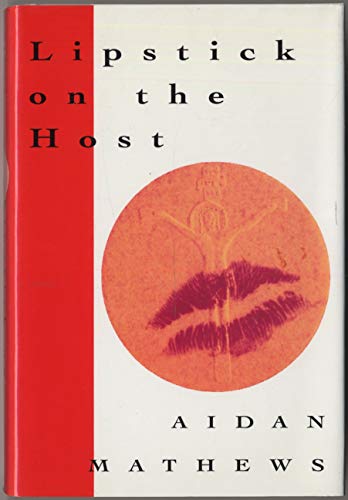 A collection of short stories by a young Irish author introduces a young Christian boy who aspires to be a Jew when he grows up and a doddering priest who baptizes Tortoise the Tortoise for a young girl. National ad/promo. Tour.

Aidan Mathews was born in 1956 in Dublin. He has published three works of fiction: Adventures in a Bathyscope (1988), which was shortlisted for the first GPA Book Award, Muesli at Midnight (1990) and Lipstick on the Host (1992), which won a Cavour Prize for Foreign Fiction. He has also published three books of poetry, the most recent of which is According to the Small Hours (Jonathan Cape, 1998). Aiden Mathews lives with his wife and two daughters in Dublin.

Six racy, colorful stories from award-winning Irish poet and playwright Mathews that plunge gloriously into the psyches of precocious children, aging single women, and flinty old priests-- and through to the bedrock of the human condition beneath. A boy travels from his home in Ireland to Germany, full of visions of Jews being transported along the rails to the death camps, but finds an unimagined use for a piece of track when he arrives (``Train Tracks''). A family holiday on the Riviera takes a bizarre twist when an old acquaintance of the father befriends the curious, impressionable son (``Elephant Bread and the Last Battle''). In failing health, a withered but alert priest is given the hope of doing a final christening when a young family approaches him, until his confession of a previous bout with madness puts them off--except for the couple's daughter, who asks him to baptize her tortoise and in front of whom he dies (``Moonlight the Chambermaid''). Most probing of all here is the title story, which chronicles a plucky middle-aged schoolteacher's discovery of long-awaited romance with a dashing gynecologist, and her devastation when her lover is killed after their only night together. A lyrical, offbeat debut--tainted at times by clich‚s and stereotyping--but generally full of wit and a profound understanding of the darker ironies of life. -- Copyright ©1993, Kirkus Associates, LP. All rights reserved.

1. Lipstick on the Host

2. Lipstick on the Host

3. Lipstick on the Host