Items related to The Monster's Ring: A Magic Shop Book 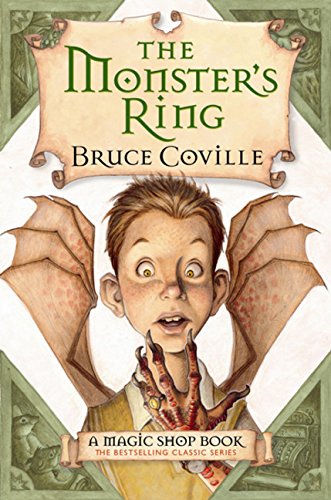 Bruce Coville's The Monster's Ring did more than launch his career as a children's novelist, it also introduced readers to the world of Mr. Elives' Magic Shop, where boys hatch dragons, toads talk, skulls spout Shakespeare, and the heroes and heroines of Jeremy Thatcher, Dragon Hatcher, Jennifer Murdley's Toad, The Skull of Truth, and next year's Juliet Dove, Queen of Love find enchantment, adventure, and insight. Now available in twentieth anniversary editions, each of these modern classics has been given a new afterword by the author and stunning new jacket art by Tony DiTerlizzi.

Twist it once, you're horned and haired;
Twist it twice and fangs are bared;
Twist it thrice? No one has dared!
Russell is sure that the ring is just a silly magic trick, but he follows the instructions and twists the ring twice anyway--and becomes a monster!

The Monster's Ring is a multi-voiced recording featuring author Bruce Coville himself as narrator and the talented Full Cast Audio family of actors. The roles of the children are played by real life children, which adds an authentic touch, and young Russell's transformation into a monster is guaranteed to delight young and old alike. Reminiscent of classic radio drama, this magical audiobook is even better because it contains the full, unabridged text. Special Feature: An exclusive afterword with author Bruce Coville, who talks about how he first got the idea for the Magic Shop books.

Pursued by the bullying Eddie, timid Russell Crannaker stumbles into Mr. Elives' magic shop, where he buys a mysterious ring that allows him to become a monster. Soon Russell finds himself growing bolder as he begins to express his inner monster. But has he become too bold?

What, exactly, is the ring doing to him? And what price will he have to pay if he fails to follow the directions? This full cast recording, narrated by Bruce Coville himself, perfectly captures the frightfully funny, deliciously scary story that launched the highly acclaimed Magic Shop series.

THE MONSTER'S RING: A MAGIC SHOP